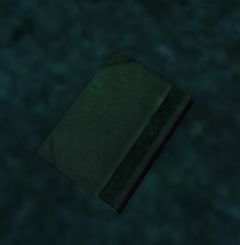 A History of Still Waters Speaking: Part Two is a book required for the A Hunger for Knowledge achievement. It is not labelled with text.

Hundreds of years ago, Drakkar Lake served as a battleground between the forces of good and evil. Svanir, brother of the famed norn hero Jora, called out to a powerful thing deep in the ice. The lake's namesake, a champion of the Ice Dragon, responded. Svanir was turned into a hideous mockery of his spiritual bear form, and Jora was forced to slay him.

Since then, the lake has been known as a place of curious whispers and dark power. Following the rise of Jormag, many norn abandoned the ancient shrines and settlements dotting the valley, leaving them to the elements and the dragon's loyal servants.

When the kodan arrived shortly after Jormag's rise, they were forced to make that valley their own. The waters would not take them farther, and their ships were trapped within mountains of ice. The small huts they built to protect themselves from the cold soon became a permanent settlement. When the time came to name their new home, all the kodan seemed to acknowledge that there was something...curious about the nearby lake.

The snow muffles the sounds of nature, gives the wind a voice of its own—yet this was different. The water itself seemed to speak, a whisper barely perceptible. The kodan named their settlement after this strange phenomenon: Still Waters Speaking.

Then Zhaitan was slain. Then Mordremoth. Then Kralkatorrik. With each Elder Dragon slain by the Pact Commander and their allies, the whispers seemed to grow louder. What was once a murmur on the wind soon became fully formed words. You heard the words, and the words knew you heard them. They would speak to you, tell you what you wanted to hear.

You would begin to trust the words as your own thoughts.

And that was how Jormag's thoughts became your thoughts.

Somehow, Drakkar's presence in the lake was making Jormag's voice louder in the valley. The kodan knew what was happening before anyone else. They figured out what Drakkar was. Drakkar the creature in the lake, the Ice Dragon's personal champion, was a mouthpiece for the Elder Dragon. An amplifier of sorts, capable of spreading the whispers of the Elder Dragon far beyond its lair. And with the death of Kralkatorrik and the emergence of a new Elder Dragon in his stead, Drakkar's whispers became unbearable.

The kodan of Still Waters Speaking, who had once traded and communicated with all manner of settlements and factions beyond their borders, closed themselves off to the outside world. They could not know which thoughts were their own and which were the dragon's. Whose voice was whose? Was your voice yours, or was it Jormag's?

Aiding Thunder was a kodan of Still Waters Speaking, and I had the pleasure of making his acquaintance in Frostgorge Sound shortly following the demise of Zhaitan. He had gone to other kodan sanctuaries seeking supplies and knowledge of the outside world, perhaps knowing deep down that the whispers would only continue to grow louder as the current Elder Dragon cycle persisted.

When I traveled to Still Waters Speaking shortly thereafter, following the demise of Mordremoth, the kodan guards standing before the closed settlement gate snarled at me, demanding I leave. The valley, they said, was far too dangerous for one unaccustomed to the whispers.

I asked whatever happened to Aiding Thunder, the kodan I had met not long ago. The guards looked at each other. Was it anger? Shame?

One of them turned to me, taking a troubled breath, stiffling tears.

"His voice was not his own," he said.

I asked if Aiding Thunder was all right. I asked if I could see him.

The kodan guard stared at me, unblinking. "You must not listen. It is not his voice you are hearing."