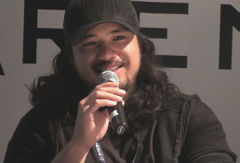 Kekai Kotaki was born and raised on the Big Island of Hawaii. Arrived in Washington in the year 2000 to study and pursue a career in art. He graduated from the Art Institute of Seattle with an Associates Degree in Animation, Art and Design. He started at ArenaNet in november of 2003 as a texture artist working on Guild Wars Prophecies and later became the concept artist for Guild Wars Factions, Nightfall and Eye of the North. He was the Lead Concept Artist for Guild Wars 2 until leaving the company in June of 2012.