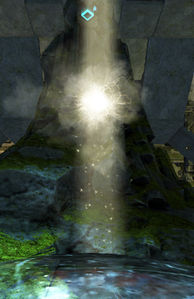 The Ancient Power Core is the base of a large machine found in the abandoned lab from the personal story. The lab can be accessed by swimming from Rata Novus Waypoint. Exalted Markings is required to make it through the underwater tunnel.

Starting from the Rata Novus Waypoint, dive down into the water directly south of the waypoint - a deep shaft will be lined with perimeter defense turrets. Swim down to the bottom, and use the Exalted Beacon (this requires the Exalted Markings mastery) to pick up an Exalted Crystal. The crystal produces light which protects you from the darkness of the depths and the piranhas, it also fears nearby enemies away.

Swim north out of the darkness, then up past the crystal to the surface. Climb the ramp leading out of the pool at the northeastern edge. After emerging from the pool you will find yourself in a room with mossy platforms and a leaning pillar. If you look ahead and upwards you will see the wall of the lab where the Ancient Power Core resides.

Climb up to the platform in the middle of the room, and then jump and glide towards the sloping pillar (the view from the central platform of the pillar is obscured, but glide forwards and left). After landing on the pillar, climb to the top, and circle anti-clockwise around the room by jumping and gliding. At the top of the wall, glide down and commune with the hero challenge in the empty lab.

The power core has inexplicably kept this facility powered for years.

The power core has inexplicably kept this facility powered for years.

You've learned all you can from this place of power.