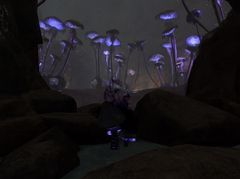 In the mushroom cave of Rata Novus, in a small rocky cave are a cluster of Newborn Mushrooms. Interaction with them will trigger the group event Defeat the Champion Mushroom Queen which must be completed within 10 minutes to complete the hero challenge.

This challenge is most easily accessed following completion of the Rata Novus meta event chain, as this will disable the sentry traps. Completing the chain opens the lab door above the Rata Novus Command Center. There are two ways into the Rata Novus Orchards; the primary route is by dropping through the hole in the lab above the command center, and the secondary route is to glide from the stairs to the command center into an opening in the opposite wall - both of which lead to the Orchards. The Mushroom Queen is at ground level within the Orchards.

These mushrooms sprouted recently. It's odd that they're defenseless and in the open.