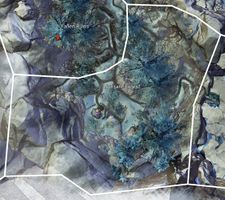 The Aberrant Forest is an area within Bjora Marches overrun by Aberrant creatures. It is said to be home to dark and powerful magic which affects trespassers with insatiable hunger; if those who are affected give in to the hunger and eat the flesh of their comrades, they eventually transform into boneskinners which begin stalking their prey in the forest.[1][2] The Spirits of the Wild Ox and Wolverine have shrines dedicated to them deep within the forest, and the shrines are now shrouded in darkness.

Defeat the patrolling Sons of Svanir (80)

Escort the relief crew to the Aberrant Forest (80)

Kill the nightmares hiding the survivors (80)

[Group Event] Trial of Koda: Defeat the leader of the enemy patrol (80) 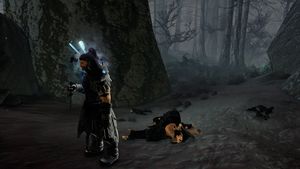