From Guild Wars 2 Wiki
(Redirected from Orr)
Jump to navigationJump to search
Spoiler alert: The following text contains spoilers relating to the story of Guild Wars 2. 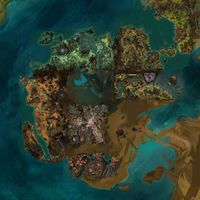 Map of Ruins of Orr

Risen from the ocean by the will of a powerful undead dragon, Orr no longer stands under human control. The beings roaming those lands are twisted, perverted remnants of Orr's once-magnificent culture. Drowned by magic and then raised into service by the will of a monster so terrible there are only whispers of its nature, they now serve a dragon more horrible and more powerful than any other being in Tyria.

— The Movement of the World: Orr

The Ruins of Orr are situated on a peninsula south of Ascalon and west of the Crystal Desert. They are the destroyed remains of one of the three Tyrian human kingdoms which was once a vibrant, proud, and prosperous nation. Orrians believed themselves to be the favored of the Six Human Gods, living in the shadows of Arah which had once been inhabited by the gods themselves. Since the awakening of the Elder Dragon Zhaitan caused the Rising of Orr from the depths of the Sea of Sorrows, the landscape has become twisted while the nation's former inhabitants have fallen into Zhaitan's corruption and become its Risen minions. Despite Orr's dark fate, however, hope still lingers deep within it, and the fallen land may still have a chance to be healed.

At the end of the Elder Dragons' previous rise, around the time of the disappearance of the Great Giants over ten millenia ago, the Elder Dragon Zhaitan slept deep beneath Orr, until the day it would rise again. In the millennia that followed, the Six Human Gods arrived from the Mists, and made Orr a green and flowering expanse. They followed a source of magic coming from the Artesian Waters and built a city, which they called Arah, over the subterranean waterway.

Later, the humans came to Orr in 205 BE where, under the guidance of King Doric, they created the human system of governance and an empire that spanned the northern continent. Eventually, the empire fragmented into the three historical nations, of which only Kryta remains today. When the gods left the world in the Exodus of the Gods, the Orrian people took on the protection of the holy city of Arah as their sacred charge in hopes of the gods' return. Even after the Exodus, Orrians practiced magic in an everyday fashion that would have seemed strange to visitors.[1]

The Orrian nation lasted until the end of the Third Guild War in 1071 AE, when Vizier Khilbron, desperate to protect Arah from the charr invasion that had already ravaged Ascalon, read from one of the Lost Scrolls. The invocation unleashed dark magic that defeated the charr, but also sank the nation of Orr to the bottom of the ocean, taking its people and its cities with it.[2][3] All that were left above the surface of Orr were the wandering undead, who, under the control of the Vizier (now an undead lich lord), were to play a key role in the fulfillment of the Flameseeker Prophecies. This event became known as the Cataclysm. According to sailor stories, the gods themselves turned Khilbron into a lich in penance for his actions.

For years after the Cataclysm, Orr sat on the floor of the Bay of Sirens which became known as the Sea of Sorrows due to the events that had transpired there. Few sailed near its cursed shores, and much of the nation's treasures remained ripe for the pillaging, making the shattered peninsula an ideal location for corsairs fleeing Istani law to dock.

In 1219 AE, Zhaitan awoke and brought the sunken nation of Orr to the surface. The act wiped out the area's corsair inhabitants and much of the wildlife remaining there, raising them from the dead as Zhaitan's Risen army, causing a Great Tsunami in the process. In the century since, Zhaitan ruled over the fallen landmass and the Strait of Malchor with an unwavering grip.[4] Despite the dragon's corruption, however, a slow life still pulsed in the beleaguered nation's veins. 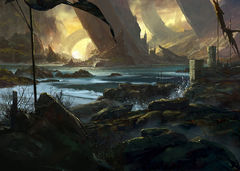 Banners on the shores of Orr.

The eldest of the sylvari Firstborn, Trahearne, threw himself into studying Orr after being given a Wyld Hunt to restore the land. He often traveled to Orr to explore and study it alone, but when he learned that Zhaitan's forces planned to attack Lion's Arch in 1325 AE, he traveled to Claw Island to warn the Lionguard stationed there, albeit too late. The defeat at the Battle of Claw Island made Trahearne seek guidance of the Pale Tree along with a trusted friend of one of the three great Orders of Tyria. In a vision of a possible future shown to Trahearne and his friend in the Dream of Dreams, the spirit of King Reza, the last king of Orr, gave a warning: while Zhaitan could be defeated, Orr could only be healed from the dragon's corruption by "seeking the source." To accomplish this, Trahearne was given Caladbolg, a legendary greatsword created from the bark of the Pale Tree.

With the aid of his friend, Trahearne convinced the three Orders to join forces and form the Pact to fight the dragons with himself as marshal and his friend as the Pact Commander. After reclaiming Claw Island from the Risen, Trahearne led the Pact into victory after victory, reaching Orr and the doorstep of Arah itself. There, he and the Commander traveled to the Artesian Waters, the Source of Orr, from which all Orr's waters and natural magic flow. Trahearne cast a powerful healing ritual with Caladbolg, freeing Zhaitan's most powerful lieutenants, former kings and queens of Orr, from the dragon's control. As a gesture of thanks, the liberated spirit of King Reza declared the Pact Commander "Champion of Orr". With Zhaitan all but crippled, the Pact and Destiny's Edge moved on into the ruins of Arah itself to lure out and defeat the Elder Dragon in a titanic battle in the skies above Orr.

Since the fall of Zhaitan, the number of Risen in Orr thinned, and for the first time in centuries, Orr had hope in its future. Scholars from the Durmand Priory used the opportunity created by Zhaitan's fall to explore Arah in detail. They discovered information about the five elder races of dwarves, Forgotten, jotun, mursaat, and Seers, as well as the Bloodstone, while fighting against surviving Risen and securing Zhaitan's severed tail for further study in the Priory's Special Collections.[5][6] The Inquest led by Operative Brie also explored the city in an attempt to uncover its secrets and successfully enslaved some Risen to do their bidding while clashing with Pact forces.

The surviving Risen eventually came to be called the Unchained as they no longer had an Elder Dragon to follow. However, some of the more intelligent Unchained lieutenants such as kingpins rallied their fellow directionless dragon minions to continue the fight in Zhaitan's name.

In 1330 AE, a Vigil Warmaster confirmed that the Risen army and corruption lingered and that Orr remained a "waterlogged wreck", but progress in cleansing the land of both minions and corruption continued. The Pact Commander entered the Artesian Waters once again and faced a final challenge to restore Caladbolg after it had been broken in the Pact's war against the Elder Dragon Mordremoth.

Some time after the fall of Zhaitan, Siren's Landing was revealed in Orr and attracted Tyrian adventurers, scholars and treasure hunters to explore it. Firstborn Dagonet, sylvari and other races of Tyria continued to work on restoring Orr while entering and studying the newly revealed region. They were joined by King Reza and a number of ghostly Orrian royals and servants, seeking to restore ancient reliquaries devoted to the Six Gods and purge the land of Zhaitan's lingering corruption. Oakhearts helped spread verdance to Siren's Landing albeit at a slow pace as they were clashing with Zhaitan's remaining minions. Lingering ghosts of Orrian musical wizards known as the Sirens of Orr sang the dirges of five gods with the Siren Master teaching curious explorers ways to harness the magical power of these ancient songs.

The rogue god Balthazar's mercenaries and fanatical members of the Church of Balthazar appeared in Siren's Landing as well and set up a base of operations at Balthazar's Reliquary while fighting against anyone daring to approach the site. The reveal of Abaddon's intact reliquary, which Balthazar had briefly visited during his return to Tyria and where the Pact Commander and the long-lived necromancer Livia finally killed the last mursaat Lazarus under the gaze of the Eye of Janthir, attracted the attention of a self-titled Priest of Abaddon who made an effort to study and preserve knowledge of the fallen God of Secrets. Enigmatic Parables of the Gods were also discovered in the region around this time, revealing darker interpretations of the nature of the Six.

This achievement consists of discovering all 60 areas within Orr that were available when the game launched, and thereby excludes any of the areas within Siren's Landing as it was added during Living World Season 3. Some commonly missed areas are as follows:

Regions
The World of Tyria
Retrieved from "https://wiki.guildwars2.com/index.php?title=Ruins_of_Orr&oldid=2378619"
Categories: