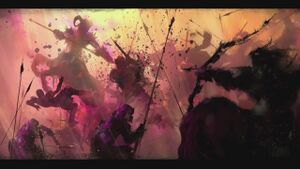 The Centaur War is a thousand year old conflict in Central Tyria between the humans of Kryta and the centaur alliance of the Harathi, Modniir and Tamini tribes.

Initial skirmishes between humans and centaurs began around 300 AE when Kryta was colonized by Elona and spread into centaur lands. During his reign around 800 AE, King Oswald Thorn of Kryta attempted to propose a treaty with the tribes, but the centaur leaders rejected the terms as unfavorable.

The war had reached a low point after the Charr Invasion and the rule of the White Mantle in Kryta, and the undead incursions from Orr around 1072 AE. During this time, an attempt was made between the Modniir and Harathi for an alliance against the Krytans but was prevented by the Tyrian hero of the Flameseeker Prophecies. A few years after this, the Modniir were nearly wiped out by norn and the Ebon Vanguard.

A centaur named Ventari promoted a philosophy of peaceful coexistence between races to end the bloodshed. However, the centaur tribes of the north and west, crushed and driven out by Krytans fleeing from their flooding coastline, grew more and more savage and brutal. As more tribes joined the war, fewer were willing to listen to Ventari's words, and his new outpost, intended as a refuge for both centaurs and humans who were fleeing from conflict, became smaller and smaller.[1]

Around 1275 AE, Ulgoth the Mighty took the title of War King of the Modniir. Swearing revenge on humans and norn for what they had done to his people, he forcibly united the Harathi, Modniir and Tamini into an alliance. With the leadership of Ulgoth and the Modniir overlords, the three tribes redoubled their efforts to take back their ancestral lands.[2] The rise of the Elder Dragons Jormag and Zhaitan also resulted in the centaurs losing land to live in, furthering the desperation of the tribes to wage war for living space.[3]

When a company led by Captain Tervelan raided the War King's settlement and slaughtered his family,[4] it only fueled Ulgoth's anger and made him more susceptible to persuasive whispers from a White Mantle Justiciar in the Krytan Ministry who claimed the perpetrators had been members of the Falcon Company working under orders of Queen Jennah. Aligning himself with the Justiciar, Ulgoth prepared an assault into the Krytan heartlands of Queensdale with the Justiciar's promise to clear a path for the invasion.[5] The centaurs also reached out to the human bandits, working alongside them as they both intended to topple the Krytan monarchy.[6][7]

At some point, the Captain's Council of Lion's Arch and the centaur leadership reached an agreement that led to them signing a treaty that ended hostilities between their respective factions. The treaty protected travelers and merchants in various Lionguard havens, notably Kessex Haven, and allowed centaurs to trade with the haven but also prevented the Lionguard from supporting the Seraph against centaurs who were raiding human settlements in Krytan territories.[8][9][10] Emissaries claimed that the centaur alliance had accepted the presence of Lion's Arch in centaur lands and had no ill will against the city's denizens. Despite this tentative peace, both factions were suspicious of one another: centaurs visited local havens to investigate whether supplies were being smuggled from the Lionguard to the Seraph, while the Lionguard questioned centaurs whether they had been covertly attacking merchants under Lionguard protection.[11][12]

By 1325 AE, centaur forces had advanced deeper into Queensdale and began threatening the Krytan capital of Divinity's Reach with their raiding of the nearby countryside, getting as far as assaulting the Village of Shaemoor. The invaders were eventually pushed back by the Hero of Shaemoor and other defenders, and the Seraph continued the counterattack by pushing deep into Harathi Hinterlands where they battled and defeated Ulgoth after a lengthy offensive. Despite the War King's fall weakening the centaur morale for a time, many Modniir overlords remained to force the Harathi and the Tamini to continue fighting against humans. However, some among the centaurs were worried that the conflict would ultimately end in the tribes' destruction, but these dissenting centaurs were ignored, exiled, or killed.

In 1330 AE, a group of Harathi collaborated with the White Mantle who gave them addictive Bloodstone dust which turned the Harathi more powerful as well as Bloodstone-crazed. Led by Siegemaster Immelhoof and a Harathi High Sage, these centaurs established a base at Watchtower Cliffs in the drained countryside of Lake Doric and supported the White Mantle in the Siege of Divinity's Reach. However, the siege ultimately ended in the invaders' defeat at the hands of the Pact Commander and the Krytan and charr alliance.