Seers as they appeared in Guild Wars.

The Seers were an enigmatic and magical race who were responsible for creating the original Bloodstone. They were ultimately killed off in a war against the mursaat, leaving behind few potent artifacts and ruins.

The ancient Seers were genderless.[1] They had four arms, grey skin, and could levitate.

During the last rise of the Elder Dragons, the Seers forged the Shadowstone which they used to amplify their own magical abilities. Using the power of the Shadowstone, they created the original Bloodstone to contain all untainted magic to hide it from the Elder Dragons.[2][3][4] The Seers allied with the elder races of dwarves, Forgotten, jotun, and mursaat to resist the Elder Dragons and survived. During this time, the five races worked together although three of the races refused to aid the Forgotten and the mursaat in the failed assault against the Elder Dragon Zhaitan, which led to many casualties.[5]

Feeling betrayed by the rest of the alliance's lack of assistance, the mursaat refused to give up their magic into the Bloodstone and instead abandoned their former allies by fleeing from the world into the Mists. In the subsequent war between the mursaat and the Seers, the Seers were able to develop a defense against the mursaat's Spectral Agony magic. However, it was created too late in the war, and the Seers lost.

During this time, the Forgotten discovered a great spell that granted Glint, champion and scion of the Elder Dragon Kralkatorrik, a will free from control by the Elder Dragon. Glint in turn concealed many of the elder races, including the Seers, from the Elder Dragons who gradually fell into slumber to wait for the next dragonrise.[6]

Thousands of years later in 1072 AE, one of the few surviving Seers aided some Ascalonian heroes in fighting the returned mursaat and, intentionally or not, releasing the titans. During the Krytan Civil War in 1079 AE, the asuran golemancer Zinn was experimenting with a Seer's corpse to develop the Spectral Infusion.[7] Seer magic became an instrumental part of the Shining Blade's plan to defeat the White Mantle and counter the remaining mursaat during the Battle for Lion's Arch.

The last of the Seers lived long enough to witness the aftermath of the Krytan Civil War and was aware of the disappearance of the last surviving mursaat, Lazarus the Dire, who had vowed to return to avenge his fallen brethren. Before dying, the last Seer bestowed the Shining Blade organization an ancient weapon of Seer origins, which became known as the Shining Blade, and a duty to destroy the last surviving mursaat should he ever return to threaten the world.[8]

Seer ruins existed in the world long after their creators' passing, but those who found the ruins did not know of their origins.[9] During the Pact's campaign against the Elder Dragon Zhaitan and its Risen minions in Orr in 1325 AE, Scholar Randall Greyston of the Durmand Priory led an expedition into the Ruined City of Arah in search of shards of the Seer Bloodstone which the Six Human Gods had sundered there in 0 AE. In 1329 AE, Historian Tranton uncovered the secrets of the Shadowstone which the Priory had found during expeditions. 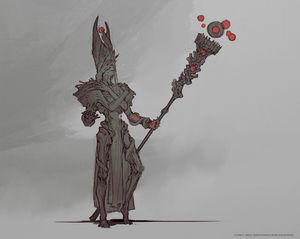