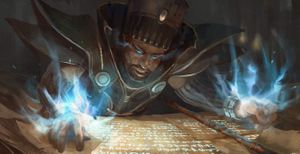 Vizier Khilbron invokes the words of the Lost Scrolls.

I will read this scroll, fully knowing the consequences. Orr will be gone. Perhaps forgotten. But it will not be remembered as a land conquered by brutes. To me, that is worth the sacrifice.

Vizier Khilbron was an Orrian vizier during the reign of King Reza. After being converted to the faith of the fallen god Abaddon and facing an invasion of Orr from the charr, he caused the Cataclysm which sunk the kingdom. Khilbron later returned as the Undead Lich and intended to become the Flameseeker to fulfill Glint's Flameseeker Prophecies as he made preparations for Abaddon's coming, only to be defeated atop the Ring of Fire Bloodstone and later in the Realm of Torment. Khilbron's legacy continues to be controversial in the present day as scholars argue about whether his actions in Orr were justified or not.[1] 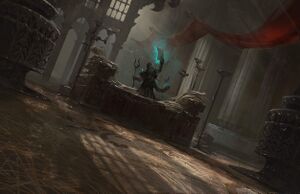 Khilbron was a vizier in the Kingdom of Orr during the reign of King Reza. Although the vizier was the king's trusted advisor and loyal to him,[2][3] he was converted to the faith of the fallen god Abaddon by Razakel, Abaddon's demonic servant who was disguised as the Orrian citizen Terick, and had a mural of the god decorating the interior of his tower.[4][5] While King Reza had sent Orrian troops abroad as peacemakers to stop the fighting between guilds in Ascalon and Kryta during the later years of the Third Guild War, Orr was left vulnerable to an invasion by the charr army which had been using the guilds' infighting as an opportunity to assault the divided human kingdoms with the powers bestowed upon them by a handful of titans whom they viewed as gods.

In 1071 AE, the charr led by Imperator Ventus successfully invaded Orr and were close to storming the gates of the capital Arah. In order to save his nation from conquest, Khilbron entered the restricted vaults of Arah to acquire the Lost Scrolls which contained powerful magic while telling some Orrians that he was going to cast a spell to defeat the charr.[6][7][8] The vizier retreated to his tower while having a contingent of soldiers to protect him and the tower from the approaching invaders.[9]

While alone in his study, the vizier wrote a letter to King Reza in which he explained the reasons for his actions and hoped for the king's forgiveness, before he invoked the words of the scrolls to cause the Cataclysm which annihilated the charr invasion force but also plunged Orr beneath the waves.[3][10] Some of the Orrians who had heard of Khilbron's plan realized the vizier's ties to Abaddon's banned religion when they discovered forbidden books in his quarters, but they were unable to stop him before he cast the spell.[11] 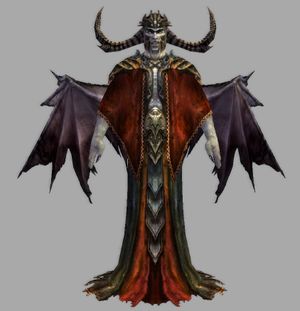 Khilbron as the Undead Lich in Guild Wars Prophecies.

Khilbron survived the Cataclysm of Orr, however, and returned as the Undead Lich to carry out Abaddon's will. Having learned of the dragon Glint's Flameseeker Prophecies foretelling a future that was to come to pass, Khilbron likened himself to the prophecy's eponymous Flameseeker who would prevail over his opposition, not realizing that Glint had deliberately concealed the last verse regarding the ultimate fate of the Flameseeker. In order to pave the way for Abaddon's return, the fallen vizier sought out to fulfill the prophecy by opening the Door of Komalie in the Ring of Fire to unleash the majority of the titan army to wreak havoc upon Tyria.

However, Khilbron had also learned that the mursaat, an ancient and powerful race of spellcasters, had returned to Tyria with their own plans of domination. As the Unseen Gods, the mursaat had been using the White Mantle cult to carry out sacrifices of magically potent humans known as the Chosen atop the Maguuma Bloodstone to keep the Door of Komalie shut and prevent Glint's prophecy of titans escaping and killing the mursaat from coming true. In order for Abaddon's ambitions to be realized, Khilbron resolved to get rid of the mursaat opposition and began seeking out a means to accomplish it.

As he ventured into the world to find potential pawns for his scheme in 1072 AE, the Undead Lich disguised himself in his former human form and presented himself as Vizier Khilbron, a survivor from the Cataclysm. He struck a bargain with Evennia and the Shining Blade who opposed the White Mantle: in exchange for the Scepter of Orr which the White Mantle had stolen, he would offer his magical assistance to the rebels.[12][13] After receiving the scepter from the Chosen heroes who had joined the rebel cause, Khilbron revealed that Markis, one of the high-ranking Shining Blade, was a White Mantle spy who had betrayed the rebels. The vizier raised undead and a ship from the depths to aid the Chosen in their escape from the White Mantle to the Crystal Desert, claiming that the Scepter of Orr granted him power over the dead.[14]

Khilbron offered counsel and magical help to the Chosen during their journey. He suggested that they attempt to ascend in order to gain the gift of True Sight with which they could see the invisible mursaat and take the fight to them and the White Mantle, and find Glint so she could help them in their quest. Following the party's return to Tyria and assisting King Jalis Ironhammer's Deldrimor dwarves in the battle of Thunderhead Keep against the Stone Summit and the White Mantle, the vizier sent the Chosen and a dwarven squad led by King Jalis's brother Brechnar Ironhammer through a portal to Abaddon's Mouth in the Ring of Fire where Brechnar and the dwarves gave their lives to help the Chosen pass through mursaat defenses. In the aftermath, Khilbron cremated Brechnar's body while the heroes uttered a prayer for the brave dwarf's soul.[15]

While the Chosen were busy fighting the mursaat, Khilbron discreetly raised Prince Rurik, their ally who had fallen in battle against the Stone Summit in the Shiverpeak Mountains, as his undead servant and brought him to the Ring of Fire without the rest of the party knowing about his plans. As the Door of Komalie was opened and the titans poured out, the vizier finally shed his human disguise and revealed his true lich form and ambitions while using the Scepter of Orr to command the titans. The Undead Lich made the Chosen fight the undead Rurik while leaving to direct the titan assault. However, the Chosen defeated Rurik and, remembering the fallen prince's last words of advice, cornered Khilbron atop the Ring of Fire Bloodstone. They used the lich's spirit to recharge the soul batteries which closed the Door of Komalie and stopped more titans from invading Tyria, fulfilling the Flameseeker Prophecies as Glint had foreseen.[16]

Despite his demise on Tyria, Khilbron lived on as a spirit in the Mists. As Abaddon had his servants such as Varesh Ossa unleash Nightfall in Elona to prepare for his coming in 1075 AE, Khilbron and fellow Abaddon acolyte Shiro Tagachi became the fallen god's generals who were tasked with issuing orders to the demonic army and guard the path to Abaddon. The pair also collaborated to create the Hunter, a special Shiro'ken which Khilbron had imbued with the power of resurrection to effectively make this minion immortal. However, with the help of the Forgotten called Keeper Kauniss, the heroes were able to prevent the Hunter from tracking them so they could slip past him and enter deeper into the Realm of Torment to stop Abaddon while the Hunter continued searching for the party fruitlessly.[17] Upon encountering Khilbron and Shiro, the heroes learned that Shiro had converted to worshipping Abaddon, declaring with religious fervor that Abaddon would rule the world of Tyria as the only, true god. After a fierce struggle, the heroes managed to defeat Khilbron and Shiro's spirits in the Temple of the Six Gods.[18] Neither Khilbron nor Shiro have been seen since.[19]

In the centuries since his demise, Vizier Khilbron continues being a controversial figure in the history of Tyria. Books have been written about him, and scholars of the Durmand Priory debate whether him sinking Orr was a justified action or not.[1]

In 1331 AE, explorers found Khilbron's unsent letter to King Reza at the Vizier's Tower which the Elder Dragon Kralkatorrik's actions in the Mists had displaced from time and space as an anomaly. The letter shed light on the vizier's actions and his conflicted feelings over invoking the Lost Scrolls, showing that he had been just as loyal to Reza as he ultimately had been to Abaddon.[3]