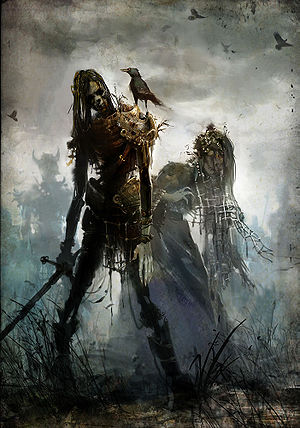 Undead refers to creatures that have died or been killed and later reanimated by magical means, commonly by necromancers. In most cases, reanimated undead do not retain their original soul and, as such, they are bound to the will of a master—the spellcaster who brought the creature into undeath—and are often useless without one, either perishing along with their master or continuing to wander without purpose.

Though not technically undead, ghosts are often seen alongside the undead (sometimes even controlling them). Excluding those created by the Foefire, ghosts often manifest themselves of their own, free or subconscious will, rather than being bound by a necromancer. They are usually tied to the world of the living due to some task left incomplete, and will often depart when their souls are put at ease.

Although many Tyrians call the Risen minions of the Elder Dragon Zhaitan "undead" due to their rotten appearance, they are not undead in a standard, Tyrian sense as any live being, and even the very environment, can be twisted by the same dragon corruption that creates Risen without the need of dying first. Instead, they are simply beings that have been influenced by a death-based dragon corruption; though most Risen are made by corrupting corpses, such is not a requirement.

As such, the only undead seen in modern Central Tyria are the minions summoned by necromancers. Elona, however, has become a nation full of both living and undead, known as Awakened, ever since Palawa Joko conquered the land.

While it is common for practitioners of any branch of necromancy to practice reanimation of the dead, there exist powerful undead necromancers known as liches. Liches not only exhibit a much greater capability of reanimating and maintaining entire armies of undead, but also extreme intelligence and an inability to be killed by conventional means. Notable examples of liches include Mazdak the Accursed, Palawa Joko, Vizier Khilbron, and Zoldark the Unholy.