From Guild Wars 2 Wiki
Jump to navigationJump to search
Stub. Key elements of this event article are incomplete. You can help the Guild Wars 2 Wiki by expanding it.
Reason: More details needed, more events

Temple of Balthazar is a meta event that takes place in Straits of Devastation. Upon completion you can access Tactician Deathstrider, an exotic armor karma merchant. This event involves escorting three paths of troops along three quest chains to the rally point at Triumph Plaza. You can start the rally point moving forward with one, two or all three of the troops there. Each set of troops makes it easier to move the Pact troops along the path to the final encounter.

The event begins with this status in the zone:

Leaders at the Pact rally point are awaiting reinforcements from the central, northern, and southern invasions before the assault on Temple of Balthazar can begin.

Once the event is ready to progress, this status appears:

At this point, three distinct Pact invasion paths open up to complete and can be progressed simultaneously:

If at any point one of the quests in any of the chains fail, wait a moment and a Defend-type event will trigger. Defend the point from the Risen and the next step in the chain will restart. If you fail to defend, the Pact will be pushed back up the chain until the event succeeds.

The status at Triumph Plaza will be one of the following, which will indicate which paths have been completed and which paths need to be completed:

The Assault on the Temple of Balthazar[edit]

The final event chain can be started when at least one of the invasion forces reaches Triumph Plaza. For each invasion force (North, Central, South) that reaches Rally point, the Pact's morale increases by 33%.

Defending the Temple of Balthazar

After gaining the temple, it remains friendly for about 1:45 hours after which an event spawns to defend it. If successful, it will remain open for about one more hour after which a much more difficult defend event triggers - with victory conditions such that failure is essentially certain. 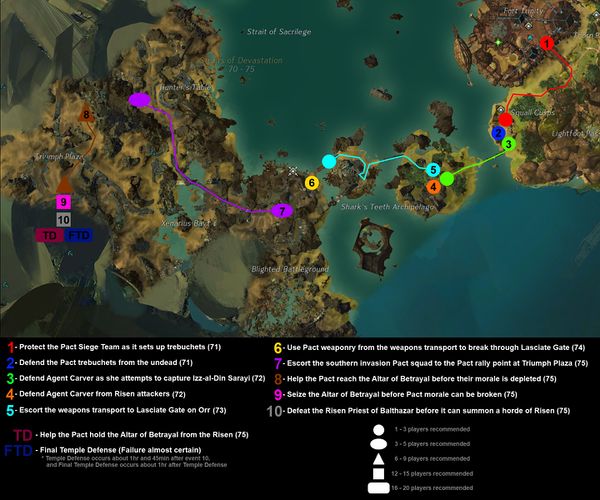 The assault on the temple of Balthazar is a multi-stage meta event, with some portions that are optional. There are three invasion paths that bring reinforcements to a central rally point, which then makes a final push to the temple. This final push can happen with reinforcements from any combination of invasion paths, using just a single reinforcement, or all three. The meta event has different scaling requirements at different stages, requiring from two to twenty players for reliable success of individual events.

Balthazar's meta events can actually be slow to start, and there's a merchant near the start point for two of the invasion paths, if you are bringing a full zerg directly to this event, bring full bags of loot to burn some time sorting/merching while waiting for the events to kick off.

Generally, the first decision to make is to split your available manpower appropriately for the invasions.

There are three invasion paths:

Assuming there is no progress on any invasion path and only the Northern invasion is active, and regardless of actually intending to complete the Northern Invasion path, send a single player to work Northern's first two events, and have the rest park in Fort Trinity. It's not unusual for a single event's completion at the Northern Invasion to be followed by South or Central starting up - Whether this is coincidence or actual implementation is moot, sending a single player North just to try kicking off the other paths gives waiting players one more thing to focus on while waiting for the other event chains to kick off.

Each invasion path has notes for how to best handle it. While only one is necessary to open the temple, more invasion paths give you an added margin for error later in the event chain. Generally, the advice is to stall (when possible and necessary) any well-advanced invasions to allow other invasions you are bringing a chance to catch up.

Each path can be started independently and advanced forward to where it takes a beachhead. Once an Invasion has a beachhead, reinforcements for that beachhead spawn almost immediately and proceed to the Rally Point

Players new to Balthazar and surplus players should find their way to the Central Reinforcement escort. There are several reasons for this: It is the most difficult, between spawns that sometimes trigger together instead of in series, and Veteran Risen Subjugators. This is also a good chance to introduce players to the Veteran Risen Subjugators - while they are not a serious threat to the reinforcement stage of the event chain, they are serious later in the chain. Now is a good chance to educate players without having the entire meta at risk.

The main escort faces various threats, and players need to balance many tasks. There are more specific notes under the escort event, but the general guidelines are:

Once the NPCs reach the Altar, a ring-cap event starts, followed by the priest fight. Capping the ring is rarely an issue, as long as the players get inside it. Depending on scaling, the Priest Fight may spawn a Champion Risen Abomination. The summary advice for the Priest Fight: