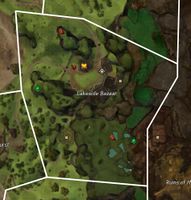 The Lakeside Bazaar is a trading post nestled along the cliff side. While largely untouched by the White Mantle incursion, a few Overzealous Villagers have begun hunting for Mantle sympathizers. 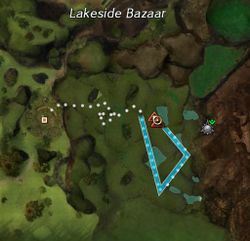 Path to the southern vista.

Temple of the Six —

Jump up the earth bank behind the house between the vista and the waypoint.

From the Temple of the Six, head east through the gap in the cliffs, and follow the stairs up to the top. Use updrafts to ascend to the vista or you can climb up rocks and glide to the rocks of the vista.

Section-stub. This key section of the article is incomplete. You can help the Guild Wars 2 Wiki by expanding it.
Reason: Villagers above the Pearl Merchant discuss Blaine's disappearance.

Blaine: This is...not good. Not good at all.

Blaine: What's a guy gotta do to get rescued from a well?

Blaine: Is it the White Mantle? A dragon? What's going on?

Villager (1): Shh, keep your voice down–people are on edge, and you don't want them thinking you're a White Mantle supporter.
Villager (2): Oh, come now. I have more faith in our townsfolk than that.
Villager (1): You sure about that? A group broke into the Fedger place the other day. Accused the whole family of treason.
Villager (2): The Fedgers? That's madness!
Villager (1): It is. And there'll be a whole lot more of it before this is over.

Villager (1): That Cin fellow's wound pretty tight, isn't he?
Villager (2): Cut him a little slack. He's got a lot on his plate keeping the troops happy.

Villager (2): They can't all be as crazy as Caudecus, can they? The White Mantle?
Villager (1): One: yes, I think so. And two: have you seen what they're doing to sympathizers? Keep that talk to yourself.