Map of The Grotto 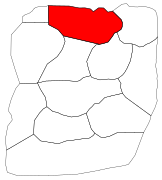 The Grotto is an area within Thunderhead Peaks. It serves as the staging area of the Pact and their allied forces for the upcoming battle with the Elder Dragon Kralkatorrik.

Ready your forces for the assault on Kralkatorrik — (80)

Path of the Exalted —

Section-stub. This key section of the article is incomplete. You can help the Guild Wars 2 Wiki by expanding it.
Reason: There's probably more missing.

Gorrik: Inventories... I'm good at inventories. Numbers. Logic. Cheering up soldiers... Agh—Commander, you can do that, right?

Gorrik: Running a barracks can't be that different from symbolic problems in abstract dynamics.
Gorrik: I mean, I know it's different. But how different could it be?

Gorrik: This would be so much easier if they just. Stopped. Getting. Injured!

Gorrik: There are too many things to do and not enough hours to do them in! The math just doesn't work! Can you assist me?

Irwen: Scouting report's ready, Commander. Whenever you want it.

Irwen: Got some information if you want it, Commander.

Irwen: Do you need my report?

Pact Soldier [Discouraged]: No hope. Not for any of us.

Pact Soldier [Discouraged]: This is bad. This is really bad.

Pact Soldier [Discouraged]: This isn't a warband—it's a buffet.

Pact Soldier [Discouraged]: So this is how the world ends...

Pact Soldier [Discouraged]: Dead or Branded... Which is worse?

Pact Soldier [Discouraged]: This is it, isn't it? This is where it all ends.

Pact Nurse: If only I had more hands...

Pact Nurse: I need bandages, sutures, and medicine assembled into med kits. Anyone?

Thirsty Pact Soldier: Got any water?

Thirsty Pact Soldier: Any water elementals I could kill for a drink?

Thirsty Pact Soldier: Anyone got a drink?

Thirsty Pact Soldier: Got a drink for a dried up husk?

Thirsty Pact Soldier: All this ice around us, and no drinking water...'

Thirsty Pact Soldier: If I had water...I could tell you...how beautiful you are...

Vigil Warmaster: Shocked to see you highborns join us grunts. How're you liking the fancy accommodations? Beds cushy enough for ya?
Vigil Recruit: Quite honestly, I can't complain.
Vigil Warmaster: Oh, really? Rowdy roughnecks and unwashed peasants are better than down pillows and servants?
Vigil Recruit: It's an honor to serve the Pact. Besides, it's too quiet at home now that everyone's dead.

Vigil Recruit: My dearest Heba. I found the flower bracelet you hid in my rucksack. I wore it the entire march north.
Vigil Recruit: I think it will bring me luck tomorrow... No. I shouldn't say that. What if I die? She'll think it's her fault.
Vigil Recruit: Be good. Be brave. Say your prayers. And listen to Uncle Zahi.
Vigil Recruit: See yo– Remember that Mommy loves you very much. Always and forever.

In the pit
Canach: Oh, hello there, Commander. Gambling is legal in Elona, you know.

Canach: All proceeds from this tournament will go towards the war effort. Well...MOST of the proceeds.

Canach: This is better than the casino in Amnoon. Here, I'm the house.

Canach: Step up! Step up! Place your bets!
Canach: Team Furball? Or Team No Fun at Parties? Only one way to tell!

Tournament Organizer: Have at it!

Rytlock Brimstone: Heh. This'll be over REAL quick.
Logan Thackeray: Wouldn't be so sure if I were you.

Logan Thackeray: Good luck to the both of us, old friend!
Rytlock Brimstone: My soldiers will eat yours alive.

Canach: And the winner: Team No Fun at Parties!
Logan Thackeray: Who came up with those names?
Tournament Organizer: (Snrk.)