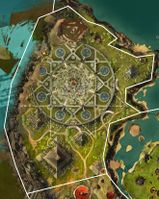 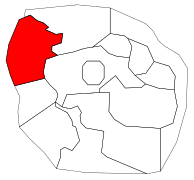 The Astralarium is a large observatory situated in the north-west of the Domain of Istan. It is a home to many astronomers and scholars, and people from all around Elona visited here to learn. Nowadays, however, the propaganda of Palawa Joko and his twisted history is spreading from there, with a hidden Sunspear base found under The Astralarium to combat them and his tyrannical rule alike.

Go to the top of the Astralarium. Use a griffon or springer to get up onto the telescope.

Defend Akili while he recalibrates mirrors around the Astralarium (80)

[Group Event] Intercept the corpse caravan departing from the Astralarium (80)

Stop the book-burning raid on the Astralarium library (80)

Section-stub. This key section of the article is incomplete. You can help the Guild Wars 2 Wiki by expanding it.
Reason: Need dialogue

Astronomer: No... It’s ruined!
Astronomer: All my hard work... Years of observational notes...

Scholar (1): You and your HERESY are going to bring them down on all of us!
Scholar (2): Shh!
Scholar (3): Keep your voice down! You're bothering people.
Scholar (1): Let's go to the Mordant Crescent now. They might still accept your confession...
Scholar (3): I'm not going anywhere with you! I have nothing to confess to those...people.

Historian: We have to get their propaganda out of the historical records.
Scholar: Do you have a death wish? They'll burn your corrected versions when they find out! And then they'll burn us!

Scholar (1): You weren't there. Those Priory scholars were laughing at us! At the histories we brought them!
Scholar (1): They only know our king as some "far-off tyrant"-their words. Said no one's seen him outside this region in ages...
Scholar (1): If that's true–and we have no evidence it isn't–then King Joko was never Tyria's greatest hero.
Scholar (2): (gasp)
Historian: Watch your mouth! You want to get us all arrested?

Scholar (1): King Joko will have you flayed when he hears what you've been saying to your students.
Scholar (2): You really think our king's that petty, that MY words would hurt his feelings?
Scholar (1): No more of this talk. You're done, understand?

Historian: Some outlanders mock our king to your face, and suddenly you’re ready to erase Elona's real history?
Historian: Revising histories in the archives is treason, you idiot!
Scholar: I've–I've only been removing claims about King Joko that I couldn't verify...
Historian: The Mordant Crescent will come down on all of us when they hear about this! And they WILL hear about it!
Historian: Once we're out of the way, they'll just restore the histories. And this pathetic protest of yours will amount to nothing!

Historian: I've interviewed eyewitnesses. Joko wasn't even there when Balthazar fell...
Historian: None of them saw what the vizier told us happened in Vabbi. No one!
Scholar: My gods. What else has he been lying to us about?

Scholar: Why did we just pass along whatever they said, without question?
Scholar: How many young minds have I poisoned with their propaganda?
Scholar: We've been teaching their fictions as history, for generations. Kormir forgive us...

Resolving conflicts between scholars or using the obelisks
Orthodox Scholar: I'll remove you from this property myself, if I have to!

Quartermaster Soanso: We just got word that new weapons have been dropped off at our cache locations. If you could assist us, we'd appreciate it.

Scholar Fatima: Aha! Another Brandstone just fell. It won't be long before it disintegrates.

In the hidden Istani Sunspear Base
First Spear Hakima: The Sunspears are an ancient order, honorable protectors from brighter years in Elona’s history.
First Spear Hakima: Most of my brothers and sisters were Awakened and forced to serve Joko. You know them now as the Mordant Crescent.
First Spear Hakima: A few survived, in hiding. Recruiting to sustain the Order across the generations in hopes they might one day rise against Joko.
First Spear Hakima: Zaeim has become the Spearmarshal of these Sunspears. We serve his vision of an Istan free from Joko’s grasp.

Books within the main structure

Books within the Sunspears Area