This article is about the mount. For other uses, see Springer (disambiguation). 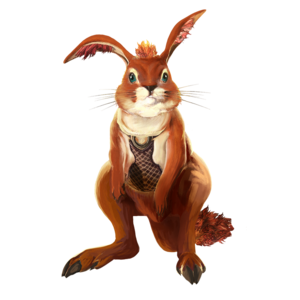 Springers are bounding beasts whose powerful legs easily maneuver them through the craggy landscapes of the Desert Highlands and beyond.

The Springer is one of the mounts found in the Crystal Desert in Guild Wars 2: Path of Fire and in Guild Wars 2: End of Dragons. The springer has an unrivaled ability to jump straight up into the sky. You can use it to jump over cliffs, walls, and other hard-to-reach locations. Hold down the hotkey to charge the jump; the longer you charge, the farther up you'll go.

Upgrades to the springer mount improve its jump ability, increase the tolerance for taking fall damage, as well as add additional effects to its engage skill Cannonball, such as the ability to knockdown foes when used.

The springer is unlocked at the Highjump Ranch in Stampede Uplands in the northern part of Desert Highlands. To get there, follow the cliffs northwest until you reach the Highjump Gap point of interest located west of Auburn Hills. The Raptor's Canyon Jumping mastery is required to cross the canyon.

It is possible to reach this area through many other means; nevertheless, the required heart Help out around Highjump Ranch will not show up until you have trained the Canyon Jumping mastery.

In Guild Wars 2: End of Dragons, the Springer can be acquired by talking to Lieutenant Zhao in Grub Lane in New Kaineng City. After exiting the dialogue the Springer will be unlocked free of charge. Note that this will not unlock the mastery track and you'll still have to purchase it in Path of Fire.

Masteries are not available to players without the Path of Fire expansion.

Their long ears and wiggly noses are charming, but the springer's greatest strength is their ability to make jaw-dropping vertical leaps. Traveling merchants and couriers use them to cross sheer cliffs in the Crystal Highlands, shaving weeks off their journeys.