This article is about the area. For a walkthrough of the mini-puzzle, see Dwarven Room Raider. 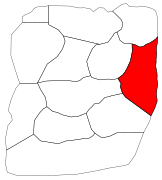 Dwarven Catacombs is an area within Thunderhead Peaks. It holds the resting places of many ancient dwarves. It is accessed by tunnels which head southeast from Ironhammer Crossing. A tall circular room contains many gates, each of which has an associated key. The first key is given by Frodak Steelstar by trading a Light of Deldrimor Plate, and each gated room contains the key to unlock the next room. Once three rooms have been completed, a final key is obtained which unlocks the gate to The Hammer's Hoard.

Traversing the boardwalk that circles clockwise around the room leads to a passageway with Brechnar's Gauntlet, beyond which lies a mastery insight and several dwarven chests.

After clearing Frodak's tomb
Frodak Steelstar: Thanks for clearing my tomb. I think I'll stay out here for a while anyway.

When ghostly mischief is active
Frodak Steelstar: Place feels livelier with more ghosts in it.

When leaving through the maze
Frodak Steelstar: Hey hey, hero–leaving so fast? This place needs all kinds of cleanup. And there's treasure.

Frodak Steelstar: It's a cold, cruel world out there. Take it from me. You don't want to go just yet.

Frodak Steelstar: Kill another graveling before you go, maybe? They're like rabbits. Relentless. And fertile.

Frodak Steelstar: Seen all kinds wander in and out through the years. Dredge. Thieves. Tourists. Pah. You, though–you're okay.

Frodak Steelstar: Well, if you're so determined to run away, I won't stop you. But you'll have to come back sometime.
Frodak Steelstar: All this treasure won't spend itself! And it's hard to find a good exterminator.

In the Dwarven Sauna
Dwarf Ghost: Welcome to the sauna! Least, that's what it was when I was alive. Got a bit hotter since then.

Dwarf Ghost: Still good for the bones. Come on in!

Dwarf Ghost: What, you shy about a little skin showing?

Dredge Ratnik: Try hitting the wall medallions. Won't get you far, but it's a fun way to pass the time until an inevitable death.

Dwarf Librarian Ghost: Who put all these torches in A LIBRARY?

Dwarf Librarian Ghost: Ahh, darkness. Good for books, you know. Keeps in from fading. Gets book vandals eaten. (when torch is extinguished)

Dwarf Librarian Ghost: THERE'S my assistant librarian. Not much of a talker. Very protective of this place. (when Spooked expires)

Dwarf Librarian Ghost: That's right, get out of here, you book vandal-shoo! (upon leaving)

In the Gauntlet Room
Ghostly Tomb Raider: Oh, another thief trying to get the dwarves' gold? Don't bother, I speak from personal experience.

Ghostly Tomb Raider: The security system is pretty good. Go on-ask me how I know.

Ghostly Tomb Raider: I was in the Mists, you know. Then I got spat out. Here I am-revisiting the scene of my own death. And soon, yours.

Ghostly Tomb Raider: Oh, you made it. Good for you, I guess.