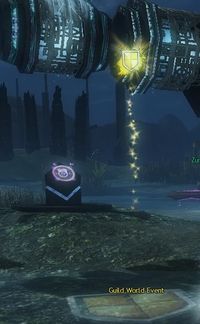 Guilds may start certain world boss events at a time of their choosing, in addition to the preset activation schedule. Guilds may not start their own event if it is too close to when the event would normally start. There are 3 stages: unlocking, manufacturing and activation.

The Scribing: Guild World Events upgrade must be unlocked in the Guild Tavern. Guilds that previously had this unlock have been "grandfathered" and have it automatically unlocked.

After unlocking, a Guild World Event Schematic must be manufactured by a scribe (rating 100). The schematic must then be placed into the Assembly Device to complete the crafting. It will be automatically placed into the guild storage after 30 seconds. Up to 25 may be held at a time.

A guild member with the "Guild World Events" privilege may trigger a World Event using a previously manufactured consumable from the "storage" tab of the guild panel. Find "Guild World Event" in the "Misc" section, under the "Consumables" tab, and activate when near a Guild World Event marker. The world boss event at that location will spawn. The activated event will be the same as if the event normally spawned.

All participants in a successfully completed the Guild World Event, whether a guild member or not, receive the same boss loot and gold that is received from the regular spawn. They vary from boss to boss.

Each person can only receive the individual rewards once per day per world boss; this resets at midnight UTC every day.