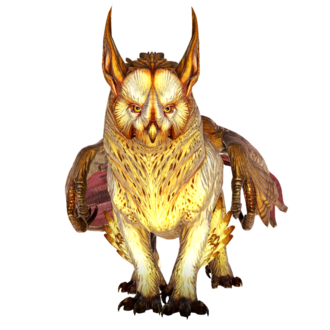 This article is about the mount. For other uses, see Griffon (disambiguation).

Glorious and noble beasts, the art of taming griffons for flight has only been recently recovered.

The Griffon is a hidden mount found in the Crystal Desert in Path of Fire that can be unlocked after completing the Path of Fire storyline.

The griffon's special movement ability is flight. While it cannot gain altitude above its starting point, apart from a substantial hop at the start, it can flap its wings periodically to regain some of the altitude lost in gliding, allowing near-level flight. By hopping on to structures or elevated terrain, it can quickly gain height. This makes it in many aspects a more effective version of the glider introduced in Heart of Thorns.

Path to Remains of the Last Spearmarshal.

Learning about the griffons

After completing the Path of Fire story, players will begin to find strange items: Strange Pellet of Bones and Fur, Strange Droppings, and Strange Feather, which direct them to Beastmaster Ghazal in The Menagerie within Garden of Seborhin, in the northern Domain of Vabbi. He'll point players to his assistant, Seeker Kandake, at Spearmarshal's Lament on Yahnur Plateau in the southeastern part of the Domain of Vabbi.

To reach Seeker Kandake, players can start from

Vehtendi Vineyard — , then turning east before reaching the vineyard. The path continues through a brandstorm, the Fury of the Brand lightning strikes can be negated by riding a skimmer. Following the path, players will reach a jackal portal. Quickly switching from skimmer to jackal to avoid the lightning and taking the portal will take players right to Kandake on

After talking to Kandake, players can mount on a springer and reach the ledge right above her. Slightly to the left is a jackal portal (the one high above, not the one at the bottom near the mastery point. If players fall down they can climb back up with a springer). Players should dismount their springer, await a small break from the brandstorm, mount their jackal, and take this jackal portal to enter the Yahnur Plateau, which is safe from the brandstorm. From the plateau, players can mount on their springer and jump to reach the Sunspear Sanctuary.

There are several other ways to reach the sanctuary, this is merely one of them.

With the Open Skies collection unlocked, players are now able to mount any griffon from a

Griffon Roost for as long as they stay mounted, there are several in the sanctuary, and others throughout Crystal Desert maps. Each collection consists of collecting runestones from events, finding and collecting griffon eggs scattered across the map, and buying items from Heart Merchants. There are 10 items in total that must be purchased. Each item costs 25

to unlock the mount.

If the Sunspear Sanctuary is accessed prior to completing the story, e.g. by using a Teleport to Friend, nothing there can be interacted with. Players who arrive there after completing the story can interact with the Remains of the Last Spearmarshal to unlock the "Open Skies" collections, whether or not they have followed the "strange items" that lead them there.

Despite weighing as much as a dolyak, the elusive giant griffon can glide at high altitudes and even take off briefly from the ground. The Mordant Crescent is acting to suppress recent rumors of griffon riders in the desert skies, and you have quite a journey ahead if you’d like one for yourself. 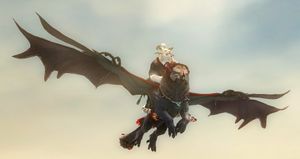 A Griffon in flight, ridden by a player character.

Once the griffon is fully unlocked, the player will have additional control options available as keybinds. In your Control Options menu, under Mounts, you will find Mount Ability 1 and Mount Ability 2. For the griffon, these keybinds translate to Dive and Climb respectively. By default, your character can Dive using the V, and Climb using C. If the "Disable Conditional Mount Movement Ability Input" option is selected (under General Options), the Move Backward keybind (default S) may also be used to Climb, overriding in certain situations its usual functionality to slow the griffon down.

Diving downwards does not consume your endurance bar and generates a small bit of speed. Flapping while diving will give you a significant speed boost and consume your endurance. You can dive manually when your endurance is at 66% and automatically at 100%, similarly to flapping. Simply let go of your Mount Ability 1 key to stop diving and level off. A longer dive results in more speed. Flapping just once during a dive instantly puts you at the maximum speed.
Pressing and holding Flap Spacebar shortly after pressing and holding Dive V (when initial dive animation is still in progress) will shorten endurance regeneration further to about 1 second.

Climbing may only be accomplished after successfully diving. Simply hold your Mount Ability 2 key to climb. Instead of endurance, Climbing takes your momentum and speed in exchange for height. You will regain roughly the same amount of height as you dived if you Climb fully. You can usually only hit this once or twice before you've lost too much momentum to continue climbing.

Tips to sustain speed and height

Unlocking these achievements will grant access to the corresponding Griffon Expert and Griffon Master adventures.