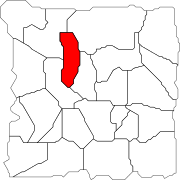 Shattered Ice Floe is an area in Frostgorge Sound. The northern part has been invaded by icebrood who killed the previous inhabitants, which were Ice Drakes and Polar Bears, and the southern part is home to a small dredge mining operation, who often cross Grimstone Mol to try and overrun the kodan refugees living at the Slough of Despond.

Section-stub. This key section of the article is incomplete. You can help the Guild Wars 2 Wiki by expanding it.
Reason: Missing more dialogue between kodan icehammer and valued memories

Kodan Icehammer: All creatures play a role in the balance. Quaggans weigh in on the side of light.
Valued Memories: That makes them valuable, I understand. Especially now, when there's so much darkness.

Kodan Icehammer: We must guard and guide the quaggans, as we do all the lesser races.
Valued Memories: Our onus is great. Only the kodan could bear such a burden.