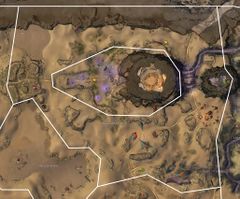 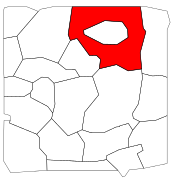 Skyward Reach is a series of hills and canyons that surround Augury Rock, and is named after the tall mesa. Most Followers of Ascension can be found here, either at their camps or out accomplishing various tasks.

Cave of the Lost

Disperse the wild magic that escaped from Augury Rock (80)

Help Flint deal with the swindlers in First Camp (80)

Stop the Branded attacking the camp! (80)

Humans (During related events only)

Section-stub. This key section of the article is incomplete. You can help the Guild Wars 2 Wiki by expanding it.
Reason: Missing several exchanges with Follower Lucius Anvilblade

At First Camp
Zuberi: I wonder sometimes if bringing the children along was the right thing to do.
Tumelo: Joko separated us once. Remember?
Zuberi: How can I forget? If we discover how to Ascend, Joko will pay dearly.

Shady Dealer: Problems ascending? I’ve got the solution. Come see the miracle for yourself.

Near the portal to Crystal Oasis
Herder Tarrik: You! A quick word before you proceed. This is no place for the ill-prepared.

Near Bounty Board
Order of Shadows Agent: Reports of creatures driven insane by ley energy are coming from all over. Are you going to help?

Order of Shadows Agent: A new bounty has been posted! Go look at the bounty boards.

Order of Shadows Agent: A new threat has surfaced. An earth djinn is running amok.

Order of Shadows Agent: When a Branded hydra gets fired up by ley energy, you know you're in for a fight.

Order of Shadows Agent: Those tremors are the stomps of a ley-crazed giant. Who will face this colossal threat?

Order of Shadows Agent: A notorious Branded griffon is showing signs of ley infection. Feel like clipping its wings?

Order of Shadows Agent: I hear an angry norn is showing signs of ley enhancement. Go get 'em.