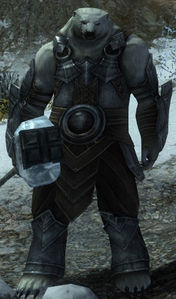 Trembling Song was a cultural representative selected to attend the burning of the effigies during the first annual Dragon Bash and place memorials of kin killed by the dragons on the pyre. Trembling Song runs off when one of the pyre is sabotaged to explode. He is later found at Dragon's Rising in Snowden Drifts. Hostile Aetherblades are around him. He believes his offering was tampered with while he slept by the fire of travelers he met on the way to Lion's Arch. He is persuaded to return to Lion's Arch.

Speaking to Trembling Song during the epilogue
I should have recognized their voices as the ones I heard by the fire that night. The killers are unmasked and my walk home will be lighter knowing they'll be punished.