This article is about the kodan city. For the guardian skill, see Sanctuary. 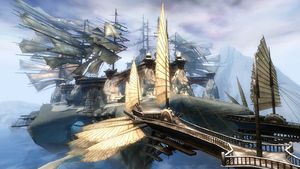 When the great storm had finally passed, the kodan saw their gift from Koda. Great sections of the seas had frozen, creating floating islands of ice. And the kodan climbed onto these and so could now live upon the land and the sea. And they watched and they learned and they hunted.

— The Wisdom and Power of the Kodan

Sanctuaries are floating glaciers that hold kodan cities. They once resided in restless seas further north than the Far Shiverpeaks. The glaciers were created during the Dragonstorm, and were viewed by the kodan as a gift from Koda. Each sanctuary has two co-leaders: the spiritual Voice, who communes in isolation with Koda, and the warrior Claw, who interprets the Voice's visions.

With the rise of the Elder Ice Dragon Jormag, the kodan sanctuaries were divided—some were capsized, some were driven further north, and some were driven south, filling in areas where the land cracked and flooded. Three sanctuaries can be found in Frostgorge Sound, having been assaulted by the Claw of Jormag as they fled south.