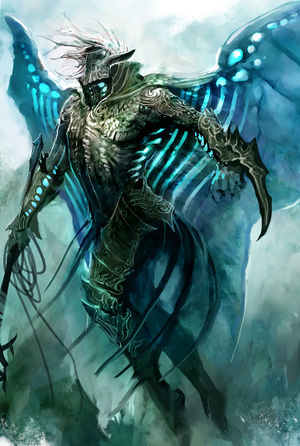 May your steps be relentless.

The largos are an enigmatic aquatic race from the depths of the Unending Ocean and the arctic oceans to the far north. They are silent, lonely, determined, and calculating killers. Few have ever seen them and lived to report it. The largos purposefully do not interact with land-dwellers.[1]

All largos encountered so far have been tall, humanoid creatures with pale blue skin, and white hair. They have wing-like appendages attached at the base of their neck, which are used for swimming. These "wings" are often brightly colored and resemble butterfly wings or the pectoral fins of manta rays in design.

Largos are never seen without their masks, and their voices seem to be partially obscured by some sort of breathing apparatus. They are capable of becoming invisible as they hunt their prey or scout their area.

Largos culture is heavily oriented around honor, and have a concept known as eternas, without which a largos is nothing.[2] Largos value skill and vigilance above all else, and status in largos society is determined largely by proficiency in combat.

Nearly all largos encountered so far have been on some sort of hunt. Many are seen hunting krait, which is unsurprising as the two are likely to have some history, and others are found hunting Risen, which are said to make for a challenging hunt, particularly Risen krait.[3][4] A largos, or perhaps a group of largos, has also been hunting sylvari Wyld Hunt valiants in the Brisban Wildlands. Another largos has been seen targeting a kodan in Snowden Drifts. Warden Hywel has mentioned a largos being voluntarily captive with him since she wanted to hunt the Krait Slavemaster, considering him as a "worthy prey".[5]

It is unknown how the largos pick their targets, though they do seek challenging hunts and prefer stronger prey. As their status within society is determined by their proficiency in combat, failure to kill a designated target is a great insult to their personal and communal honor. Likewise, it brings dishonor to fight a weak or unprepared opponent, which is seen as a violation of the Tethyos Compact.[3][6]

Young largos have been seen traveling with a master. Each master seems to have only one student.[7] Largos have a strong sense of obligation; when there is a debt of any sort, the largos is tied to the other party until neither owes the other, regardless of who incurred the original debt.[1]

Nothing is known of largos religion. When a largos dies, it is said that their "steps have faltered".[8] Largos have also been heard swearing "by the Tethyos Compact and the shadowed Scions".[9] According to a largos saying, the scions, who seem to be respected figures in their society, are always listening.[6]

The largos are governed by the Tethyos Houses, and live according to the dictates of the Tethyos Compact. Trophies of completed hunts are presented to the great Houses in the name of the hunters that obtained them.[10] The largos swear to both the Tethyos Compact and what they call the "shadowed scions" although it is unknown what role the scions play in largos society given how little information the largos have chosen to reveal to other races about their government.[9]

Virtually nothing is known of largos history, as they are only recently emergent, and not exactly forthcoming with the tales of their people. What is known is that in their homelands of the deep oceans of the far north, they coexisted peacefully with the quaggans through non-interaction. Furthermore, largos from the Unending Ocean have unknown "horrors" in their homelands.[7]