This article is about the world boss. For the event schedule, see Defeat the Claw of Jormag. For the Elder Dragon, see Jormag. 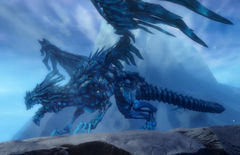 The Claw of Jormag hunted our fleeing sanctuaries, and devastated Honor of the Waves. It's only a matter of time before the Claw finds us, too.

The Claws of Jormag are champions of the Elder Dragon Jormag that have followed the kodan Sanctuaries south into Frostgorge Sound and beyond. These world bosses fly around and terrorize the kodan and Pact camps by dropping corrupted ice shards containing icebrood.

Claws of Jormag are a form of what appears to be a dragon, whispered to by Jormag and transformed by the Elder Dragon, imbued with large amounts of dragon energy by Jormag after corruption. Claws of Jormag are seemingly in a late state of corruption, appearing to skeletal and looking as if they are composed of entirely of corrupted ice. They have been known to both hunt down enemies of their master such as the kodan and defend Jormag from threats. Their attacks appear to vary upon the Claw.

The Claws of Jormag hunted down kodan fleeing the Far Shiverpeaks after Jormag's awakening, crushing their sanctuaries and killing many kodan.

In 1325 AE, a Claw of Jormag assaulted the Loneholme Range, a mountain range in the Shiverpeak Mountains containing two norn settlements. It dropped a number of cores of corrupted ice within an already-corrupted area, summoning icebrood elementals to protect the cores. A group of adventurers soon destroyed the corrupted ice alongside the corrupted elementals. Another could be seen flying overhead in Dragon's Rising.

Sometime after, the Pact, a newly-formed alliance between the three orders, sent a number of troops to fight off the icebrood there. In Arundon Vale, a group of grawl witnessed a Claw of Jormag flying overhead and declared it to be their god, renaming their tribe to the Dragon tribe. A Claw also attacked Ridgerock Camp, a Pact encampment, by dropping Corrupted Ice Shards on the camp in a coordinated attack with a number of icebrood Sons of Svanir.

A powerful Claw of Jormag was soon identified by the Pact as it dropped dragon crystals near the Pact's flak cannons and siege wall, on the road to the Slough of Despond, outside of Elder's Vale and another by the Pact's encampment.

It then landed, crushing anything underneath it and created a shield out of corrupted ice. The Pact's forces, aided by adventurers, battled the Claw and its minions, eventually causing it to crash to the ground in a different location, where it made its last stand and was slain.

In Bitterfrost Frontier, a Claw could be seen harassing the kodan of Sorrow's Eclipse Sanctuary.

In 1331 AE, while the Pact Commander and Braham Eirsson were battling Commander Lonai, they were teleported to Frostgorge Sound, where they were attacked by a Claw of Jormag.

In late 1332 AE and early 1333 AE, a Claw of Jormag could be seen dropping corrupted shards around Bjora Marches, a heavily corrupted area within the Far Shiverpeaks, alongside another that aided in the icebrood assault on Jora's Keep by corrupting statues of the Spirit of the Wild, Raven.

In Drizzlewood Coast, near the Frost Citadel where Jormag rested, a Claw flew around the northern part of the region, dropping corrupted shards. When the forces of the United Legions began to besiege the citadel, it summoned a greater ice elemental to defend the citadel, though the elemental was slain quickly.

After the United Legions forces escaped the crumbling citadel, the Claw opened several portals which summoned icebrood charr imbued with the magic of three of the lost Spirits of the Wild. It remained on the Spire, a large pillar of corrupted ice, until it was hit with a scrap cannon and it fell deeper into its roost. After a fierce battle, it was defeated.

Destroy the corrupted shard (80) (at beginning of the event only)

Section-stub. This key section of the article is incomplete. You can help the Guild Wars 2 Wiki by expanding it.
Reason: May be missing skills

Frigid Breath to the player.