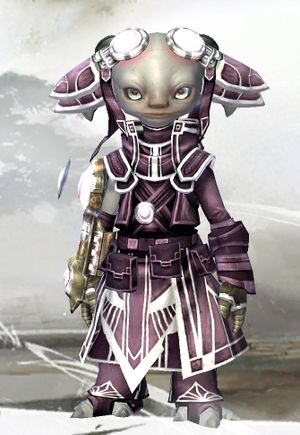 College: Synergetics — As members of the College of Synergetics, we study how energy patterns form and alchemagical fractals propagate. Few beyond our college understand the philosophical and mystical complexities of our interests. We devoutly research the true nature of the Eternal Alchemy.

Personality: Charming, Witty, Astute, Thoughtful, a real "gentleman" — I'm charming. No one can resist me when I'm at my best. I know just what to say to lighten the mood or bolster courage.

A denizen of Rata Sum whose ancestors were driven to the surface by the rise of the destroyers, Hakoob has grown to become an inspiration to younger Asura. Hakoob has proven to be intellectually superior to his would be peers with a wit as sharp as the swords he carries at his side. With seemingly boundless energy and a natural agility that befuddles his foes almost as much as his conjured illusions.

Having worked alongside Pact forces to defeat Zhaitan and known champions. Hakoob has now returned to his home in Metrica Province without a heroes welcome or fanfair. It is here, as Savant, that he has sought out the Inquest forces and begun to work on undoing the damage they have caused.

Open World PvE Builds for Mesmer can be viewed here