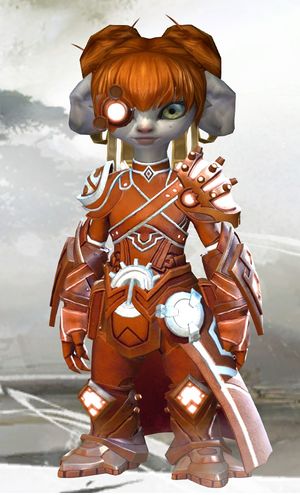 College: Dynamics — The College of Dynamics produces gizmo-makers extraordinaire. Energy, enthusiasm, and boldness are our best qualities. We believe in leveraging the expendable nature of all things. If a prototype explodes, it isn't a failure unless the lesson goes unlearned.

Personality: Charming / Feisty - I'm charming. No one can resist me when I'm at my best. I know just what to say to lighten the mood or bolster courage.

Primoire likes to be called Prim by her friends and she can be the embodiment of sweetness and a lot of fun to be around on the flip side she also tends to be rather feisty and some of her closest friends call her bossy.

When she is pushed in to a tight spot she will come out fighting hard with teeth bared and claws at the ready but not before she has thrown her trusty spanner in the works and filled her targets with lead.

Prim is fond of using all the weapons at her disposal to best suit the task at hand or for that matter her mood...

Recent innovations in Asura tech that may or may not have been influenced by the unsanctioned collaboration of Taimi, Moto and the Charr has none-the-less resulted in the creation of the Photon Forge that makes use of elementary particles to create powerful weapons with which to smite their foes as what are now known as Holosmiths.

Open World PvE Builds for Engineer can be viewed here