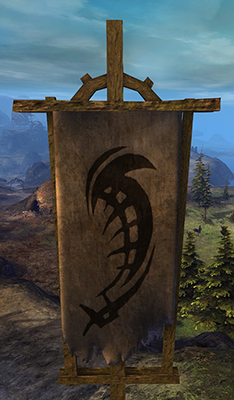 Banner used by the Tamini centaurs

The Tamini are the lowest herd in the great centaur alliance. They're scouts and guerilla fighters—swift-moving enemies. They can be a bit flighty and overeager, but they're very clever.

Tamini are one of the centaur tribes in the centaur alliance who have been overpowered by the Modniir and urged to attack humans with the Harathi. They have been described as the lightly armored scouts found around the edges of the centaur army, originating from the eastern Far Shiverpeaks.[1] The Tamini are often used as foot soldiers in the centaur army, fighting in the front lines. Tamini are distinguished among other centaur tribes by goat-like facial features and horns, and a spotted brown and white body. In the past, the Tamini were nomads before being united by the Modniir.

Aggro
Alert!
For the Tamini!
You will be broken!
To me!

Disengage
I will find you!
Pathetic wretch.