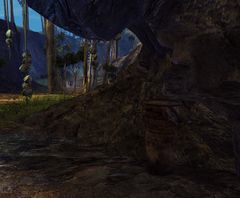 Erts Jug of Power Unguent[sic] sits in Veteran Ert and Burt's cave at the head of Pinion Trail. If one can tire Ert out, a sample of Ert's Unguent from the jar is an... interesting, if foul, reward.

The unguent is placed into your inventory after interacting with the hero challenge and the hero point is received when it is consumed, which can be done at any time. The use of the unguent also provides a green tint to your character for some time.[verification requested]

Green sludge slops over the edge of this jug. Its potent aroma fills your nostrils and makes you dizzy.

Take some of the sludge.

A label on the side of the jug says, "One serving per head."