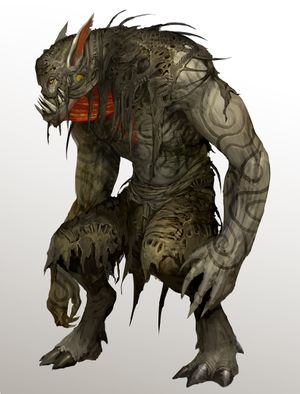 Trolls are large, tusked, brutish humanoids in Tyria. They are primitive creatures with a very basic tribal society led by chieftains. Many trolls prefer living in cave systems across Tyria, though those found in the Shiverpeak Mountains can be found in the open, and those in the Maguuma Jungle can often be found within denser portions of the jungle.

Not much of their culture is known, though it is known they can communicate with other races in the very rare cases they want to.[1] Because of their lack of communication, very little is known about troll culture, though they are known to use skulls of their prey as decorations for their homes, and jungle trolls can be seen with tribal tattoos.

Trolls are known to have a natural healing property that they use while in combat to recover from severe wounds. They can also generate lightning shocks to fend off attackers and other creatures encroaching on their territories.[2]