This article is about the non-charmable animal. For the pet version, see Juvenile Murellow. 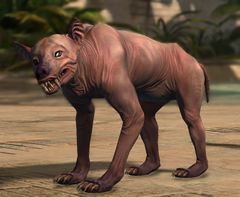 Murellows are creatures that appear as a mix of dogs and moles. They are known to be disease-ridden and have a putrid smell to them. Originally from the Depths of Tyria, they were brought to the surface by skritt, some of which tame murellows as pets and guards.

Section-stub. This key section of the article is incomplete. You can help the Guild Wars 2 Wiki by expanding it.
Reason: Missing drops

The murellow is nobody’s favorite creature, least of all the norn – not only do they threaten livestock and caravans, but they don’t even make good trophies when mounted on the wall. Murellows typically dwell in very deep cave systems, but retain the eyesight that was the mark of their forebears – badger-like beings who lived in large familial groups. Murellows have recently been sighted close to the surface in disturbing numbers, likely the result of destroyers driving them from their original territories.

Murellows are opportunistic pack hunters, but will scavenge on occasion, their habits closest to those of rats or dogs. Though one single murellow may not be as much of a threat (aside from the danger of the many diseases that it carries), a roaming pack is a danger even to trained warriors. Though it typically goes after docile prey, it has a habit of ganging up on unsuspecting creatures… rumors have spoken of caravans attacked in the night, and grown norn falling to their foul poisons. Murellows are aggressive and expansionist as well, and will viciously defend what they have marked as their territory.