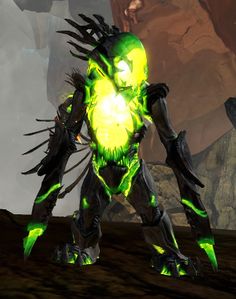 Veteran Corrupted Destroyer are powerful destroyers sent to assault Glint's Egg as it hatched. It appears akin to the Destroyer of Worlds, but has been infused with the death magic of Zhaitan after Primordus absorbed remnant magic from Zhaitan's death.

Anomaly:
Despite its ability description, it does not seem to pull foes or create an Aura of Death
Retrieved from "https://wiki.guildwars2.com/index.php?title=Veteran_Corrupted_Destroyer&oldid=1806609"
Categories: