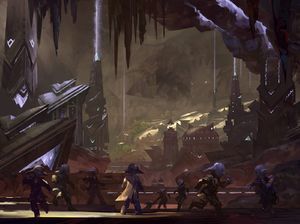 Concept art of an asuran undercity.

Quora Sum is one of the lost capitals of the asura in the Depths of Tyria. One of at least six subterranean cities as large as Rata Sum, Quora Sum was wiped out when the Elder Dragon Primordus stirred and destroyers flooded the depths.[1][2]

The amount of knowledge lost in the destruction of Quora Sum was one of the things that inspired the founding of the Inquest.