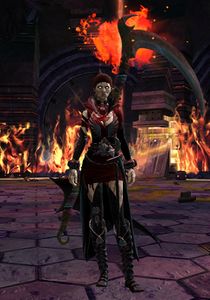 These fools don't know what they have: Freedom to do as they please. No master to control them.

In life, Lonai was a member of the Order of the Sunspears. She was part of an elite unit led by Nerashi and accompanied with Ahtok and Rojis. After helping Kormir and the Sunspear Hero prepare the Sunspears for war against the ambitious Kournan Warmarshal Varesh Ossa in 1072 AE, Lonai's unit (sans Ahtok, who joined Kormir and was subsequently killed by his greatest fear of dying: siege artillery) led the second assault on Gandara, the Moon Fortress.

During the assault, Lonai's unit got cut off due to Kournan Firespitters, though they were able to rejoin after Kormir and the Sunspear Hero had destroyed the firespitters. Creating an army of minions, Lonai helped lead the charge into the Plaza of the Five Gods. There, Varesh had summoned a horde of demons that scattered the Sunspears and captured Kormir who was blinded by one of the demons known as the Hunger.

Witnessing the gruesome losses had left Lonai suffering from post-traumatic stress, and she found herself unable to fight or raise minions.[1] As such, she remained within the sanctuary that was established by the Sunspear Hero and their allies and managed the outpost, all the while pressing for the Hero to lead the Sunspears after Kormir's disappearance. Even after the defeats of Varesh and the fallen god Abaddon in 1075 AE, Lonai remained with the Sunspears.

In late 1093 AE, Lonai joined Koss Dejarin in gathering a group of volunteers to siege the Bone Palace in hopes of ending the threat of Palawa Joko before he could gather too much power.[2] This assault failed, however, and both Koss and Lonai were Awakened by Joko.

After the Battle of Kodash Bazaar in 1330 AE, Lonai appeared in the dragon Aurene's vision which depicted Lonai leading an Awakened invasion of Tyria from within a mysterious location which turned out to be Fahranur, the First City where Palawa Joko had forcibly taken the Pact Commander's asuran ally Taimi to access the Inquest's asura gate network within. Lonai stood next to Taimi's tampered golem Scruffy 2.0 and ordered several Awakened to step through the activated gates before entering one of the gates as well while the Commander's party faced the Awakened rear guard and the reprogrammed Scruffy 2.0 in combat.

While the Awakened raided various locations in Central Tyria in 1331 AE, Lonai joined Joko in securing the Scarab Plague samples from Rata Primus with the Commander's party in pursuit. When confronted, Joko ordered Lonai to kill the Commander and Braham, and the Awakened commander was left to carry out her orders while Joko fled through an asura gate. During the battle, the gates malfunctioned and began sending the battling trio across Tyria.

Their first stop was Divinity's Reach where Lonai attempted to Awaken local citizens while calling them fools for not understanding the luxury of freedom that they had. The second stop was in Mount Maelstrom where they fought within the volcano itself near an enraged Megadestroyer. The third stop was Frostgorge Sound where they were harassed by the Claw of Jormag.

Gradually realizing the Commander and Braham's strength after their continuous defiance and that she might lose, Lonai pleaded for the pair to place her body somewhere Joko could not find and Awaken her again. Her wish was ultimately granted on a remote rock at their fourth stop which was an unknown location similar to the Fractals of the Mists, far away from Joko's reach.