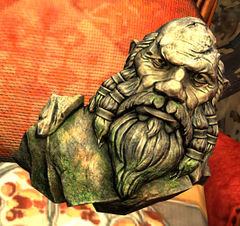 I'm still standing. In a manner of speaking.

Rhoban Orestriker is an old Deldrimor dwarf whose remains were recovered and now worshipped by the skritt pirate gang established in the Rock Face Scratch. Although there were three other dwarves with him on Ember Bay, he believes himself to be the last dwarf. He instructs the Pact Commander to take his thumb with them in order to activate the dwarven machines in Ember Bay.

Later, Rhoban can be found with a Durmand Priory team exploring Fortune's Vale and the Deldrimor Ruins while Expedition Leader Shauna and a charr assistant provide for his transportation, respectively.

Help the Priory with their excavations (80)

In Ember Bay
(snore) What? Huh? Who are you? And why are you disturbing me?

I'm <Character name>. I wanted to meet you.

My name is Rhoban Orestriker of the Deldrimor from Thunderhead Keep. You may call me Orestriker. I am one of four left here to guard this island from Primordus and its Destroyers.

There are three others here as well?

Well, no. I haven't heard from the other three in quite some time. I've sent skritt to check, but they never came back either. I've given up hope. Hey, I have an idea. You may have better luck.

Better luck at what?

Ages ago, we placed machines at four spots on this island to hold back the volcano and Primordus. Sadly, time degrades all, and we are a small fraction of what we once were. The machines need reset.

I could maybe do that.

Oh, and did I mention that they need a reset once per day or the volcano will blow and destroy half of Tyria?

Would you tell me your history? (same as below)

I'll avert today's crisis for you.

Would you tell me your history?

Rhoban: Don't be shy. Come closer so I can see you.
Rhoban: Sit and pass the time with this old dwarf, won't ya? Skritt don't make good conversationalists.
<Character name>: I'd like to know more about you and the other Deldrimor dwarves.
Rhoban: You want to know how it happened? What it felt like, turning to stone? I'll tell you what I remember, but it was centuries ago.
<Character name>: You must have forgotten more in your lifetime than I've experienced in mine.
Rhoban: I remember when I last had soft flesh like yours. I was in the caves with my brethren when word came 'round about the ritual.
Rhoban: Such a proud day, standing shoulder to shoulder with an army of Deldrimor warriors. Then, the magic swelled and changed us.
<Character name>: Why did you change yourselves?
Rhoban: My race, you see, suffered from a prophecy written over a thousand years ago.
Rhoban: The prophecy said we were destined to stand between our beloved Tyria and the Elder Dragons consuming it. And so we did.
<Character name>: What happened?
Rhoban: The Great Dwarf's magic turned us to stone. Because only stone can stand for long against fire.
Rhoban: The first time Primordus tried to take our birthright from us, we pushed that old scoundrel back down to his slumber.
Rhoban: Primordus is stirring again, deep in the bowels of the world. It's left the Shiverpeaks and begun its journey to the surface.
<Character name>: You're sure of that?
Rhoban: Today... I may be the last dwarf, though the skritt seem to believe there's one more of my kin in the Durmand Priory.

Are there caverns here? How can I get around more quickly?

Sure, but caverns won't help. If you want to move around more quickly, focus on opening your mind to the lava tubes. It takes practice and skill, but you can learn. It's how we dwarves travel.

Uh-yup. Takes a lot of courage to dive into one of the lava puddles, but if you got the stones and you got the right headspace, you can do it. Then, if you don't die, practice until you get it right.

Thanks for the tip.

In the Desert Highlands, after interacting with a runestone
Rhoban: Interested in that runestone, are we?
Rhoban: There are runestones all over the mines, used in puzzles to keep out thieves and clingy family members.
Rhoban: I was given this one a long time ago and told it was a 'key' of some sort.
Rhoban: If you find the appropriate runestone, this will reveal some secret or other.
Rhoban: And if you lose it, well...I guess we'll have to find another.

About time you showed up, Commander! Look at the state of this excavation! Look at these skritt!

Good to see you too, Rhoban.

(Rhoban)He's a grumpy old rock, isn't he, Commander? Anything you wanted to know?

What can I help the Priory with?

How can I help with the dig sites?

(Rhoban) Grab a scan gun from the cart and point it at a site. Mark sturdy artifacts for skritt retrieval. Bring back anything too fragile for skritt to handle.

How do I help sort artifacts?

(Rhoban) That's happening in the canyon to the east of here. Show up, stick artifacts in the right bin—shouldn't be anything too surprising.

(Rhoban) Yes, they're a bit of a bother.

I'll keep an eye out.

(Rhoban) Extra hands are always helpful, but the skritt have a tendency to get distracted. Nudge them back to work if you see them dawdling. And watch out for too-helpful skritt.

(Rhoban) Sometimes they get a bit enthusiastic. Which is when they make mistakes and break things. And take things. Please don't let them do that.

What's with the Brandstorm?

(Rhoban) It's keeping us away from the ruins of Deldrimor. There are countless priceless artifacts there, but the Brandstorm and the Branded mean we can't reach them.

I'll look into it.

Rhoban, you must have seen a lot of the world by now.

Against my will! Violently and uncomfortably! Subject to the whims of lesser thinkers! And the less said about it, the better!

Here are small artifacts I found! (only if you have Small Fragile Artifact in inventory)

Here are large artifacts I found! (only if you have Large Fragile Artifact in inventory)