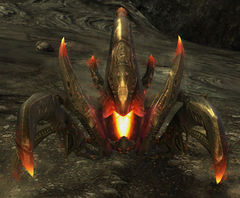 Elite Destroyer Melters are a type of destroyer that can be found during Dragon Response Missions.