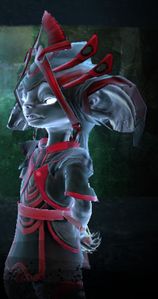 Gadd's Hologram is the last known remnant of Gadd, which is a recording of a warning to anyone attempting to break into his lab.

Gadd, father to Vekk, was one of the original asura to venture into the Tarnished Coast after their diaspora from the Central Transfer Chamber. Most of his own race did not want to be in the same room as him due to his lab ethics and general personality, relying on hired help, even if said help were disposed of quickly. He was a cantankerous, manipulative, yet intelligent, asura that aided in the push against the Destroyers using the G.O.L.E.M.. He once hired Livia to locate and extract energies from the bloodstone located nearby, though the two parted ways after the mission was completed. His old lab in Metrica Province was booby-trapped and sealed away, securing any secrets from outsiders wishing to indulge themselves in his works.

Anomaly:
Gadd's Hologram has the appearance of a blue ghost, not a typical hologram.
Retrieved from "https://wiki.guildwars2.com/index.php?title=Gadd%27s_Hologram&oldid=2116392"
Categories: