This article is about the city. For the area in Caledon Forest, see Dominion of Winds (area). For other uses, see Dominion (disambiguation).

The Dominion of Winds' wall as seen from Kessex Hills. 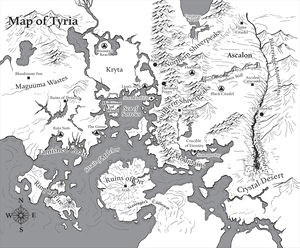 Map of Tyria from novels; the borders of the Dominion of Winds are shown.

My people tell tales of the day when we will be free, when our lands will be revealed by a heavenly star and rise. When that day comes, human, only then will our races live in peace.

The Dominion of Winds, sometimes referred to as the aerie,[1][2] is the inaccessible city of the tengu. Built atop the island formerly known as Sanctum Cay, the tengu of the world migrated here after the rise of the Elder Dragon Zhaitan, an event which they call the Great Tsunami.

The Dominion was founded approximately a century ago, the Canthan tengu having been led by the descendant of the Angchu Talon Silverwing through the Risen forces and cut through the Dead Ship fleets to reach land. When they arrived, they built a great wall to repel enemies and separate the tengu from the rest of the world. To this day, the wall fulfills its purpose, making it the last completely tengu-controlled area in the world.[1]

Within the city, tengu society is ruled by an emperor,[3] who presides over four great houses[2]—one for each of the winds.[3] The tengu rarely leave, although recently two trading outposts have been settled just outside the city, namely the Hanto Trading Post and Ireko Tradecamp.

In recent times, destroyer burrows have begun appearing on both sides of the wall.[4]