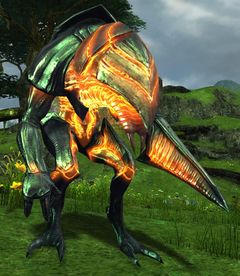 Evolved Destroyer is a powerful Destroyer Troll that has been experimented on by the Inquest.

Section-stub. This key section of the article is incomplete. You can help the Guild Wars 2 Wiki by expanding it.
Reason: Missing all skills

The Evolved Destroyer uses fire spikes similar to Subject Alpha. In addition, the destroyer troll is protected by a shield which can be taken down by simultaneously activating the three cryolasers. The shield is only down for a little while and has a knockdown effect which can cause players to be knocked into lava. For this reason it's best that three players take up positions with the lasers and two attack the Evolved Destroyer from a distance.