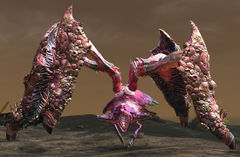 Champion Karkas are large, mature karka that have been found throughout Southsun Cove, though more have been discovered in the Ring of Fire. While many were encountered defending the Ancient Karka during the final stage of the Lost Shores release, currently only one is known to have survived the Lionguard's attacks on the island and can be found residing at the top level of the Karka Hive.