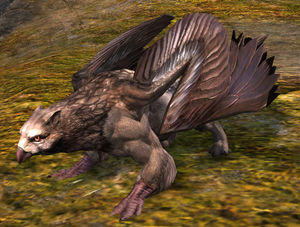 This article is about the species. For the mount, see Griffon. For other uses, see Griffon (disambiguation).

Griffons are four-legged winged creatures found across Tyria and Elona. Their appearance changes, though they will always resemble a mixture of a bird (head, wings, and sometimes foreclaws) and a feline. Their appearance greatly differs based on their geographical location. There is a unique breed of griffons—colocals—that are wingless, instead using their third set of limbs as pincers.

Griffons are very territorial by nature, and will fiercely fight to either defend or expand their homes. They often decorate their nests with trophies from their prey, such as bones or shields.

Griffons are often one of the favored hunts of the norn, due to their strength and abilities of flight, as well as a favored pet among the ogres.