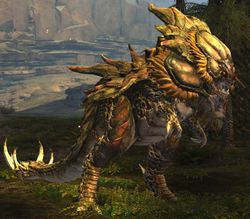 Long thought lost to time, these animals have evolved to not only survive the jungle but to thrive in it. Some are fast, some are hardy, some are massive, but all are incredibly dangerous to the unwary jungle explorer.

Perhaps closer to being an order rather than a species, Saurians refer to a wide variety of reptilian creatures. In the past, they could be found as far east as the Blood Legion Homelands, and as far west as the Tarnished Coast, now they seem to be localized in the western Heart of Maguuma, though some have been seen on the Ring of Fire islands. Being animals, saurians have no culture or hierarchy to them, and they follow a simple pack alpha leaderships. Saurians are visually distinctive by their vibrantly colored skin, creating a stark difference to the green scenery they're often found in.

Many Saurians were among Mordremoth's first victims of being taken to Blighting Trees to create perfect copies.