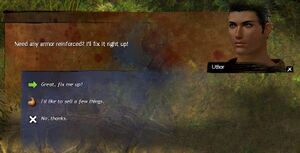 Reinforce Armor is a mechanic and service offered by Anvils and NPCs which temporarily improves a character's vitality and defense.

Interacting with an NPC or Anvil marked with the [Reinforce Armor] nameplate and icon will provide a 12 hour effect, Reinforced Armor.

The strength of the provided effect depends on the game mode. Vitality and Defense are increased by 5% in PvE, with a smaller 1% increase in WvW. It has no effect/is removed in PvP.

The same effect is also provided by the following sources:

Need any armor reinforced? I'll fix it right up!

Great, fix me up! (Grants

Good as new! Unless you start up bear-wrangling, this should last you a while.

That won't be a problem. Thanks.

All right, show me your wares.

That's all I needed. Thanks.

Note that the following list omits Anvils, which are located in numerous locations ingame.