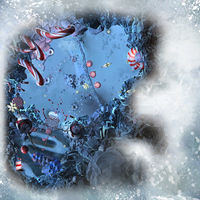 Winter Wonderland is a jumping puzzle style activity that is only available during Wintersday. Players must jump across a precarious path of melting snowflakes, hop over exploding presents, and flee past massive rolling snowballs. Interact with the chest at the end of the puzzle to receive your reward. 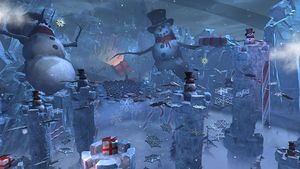 The puzzle is instanced content with a limit of 20 players per instance. Being inside the instance counts as being in combat at all times and prevents any gear or template change. Additionally, all skills, effects, pets, minions etc. are disabled (except those granted by the puzzle). All other players are shown as hostile (red labels) but there is no way to attack them.

Players can also use the end teleporter to leave the instance, or leave through one of the Asura gates on the starting platforms.

Each instance will reset after 30 minutes (countdown is shown at the top of the screen). Each time the player arrives at the end of the puzzle a counter will increment at the top of their screen. Before the instance is about to expire a dialog will show player completion rankings, but there is no prize associated with being first.

After the instance reset there is a short cooldown period and a 10 second countdown. The player's character will have its position reset after the cooldown so there's no point in starting the course yet.

There are bonfires on the three starting platforms and a fourth one on the platform near Tixx. Arriving at a bonfire restores their full health. Whenever players are away from a bonfire the Frostbite effect will slowly whittle away at their health until the player dies. The effect will cause players to die in 100 seconds (easy route), 66 seconds (medium), or 55 seconds (hard).

The ending of the jumping puzzle.

Toymaker Tixx: This Wintersday will be full of wonder!

Skritt: You're gonna get it, and I'm gonna give it to you!

The hidden area above the reward chest.