Enter through any Haunted Door with a pumpkin icon

. Talk to the Lunatic Boatman and ask to be moved to the Lunatic Inquisition. He is also located in Plains of Ashford, Queensdale, Caledon Forest, Metrica Province and Wayfarer Foothills. In each of those five maps, he is always near the playable race's home city entrance.

The status bar at the top of the screen will show the time until the next round. Each round lasting 13:00 minutes. It also displays your personal points earned and the top player's total. 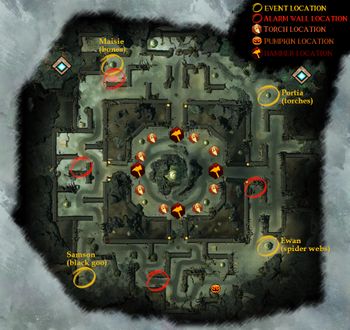 Rule #1: Don't die. While playing as a villager, players begin with no skills other than a 10 second self-stealth skill. Enemy players are Lunatic Courtiers, whose objective is to kill Villagers. They have melee attacks as well as a leap attack and a scarecrow that causes fear. Acquiring tools lying around the map will give Villagers a skill that can be used once to hinder enemy courtiers.

Only one bundle can be equipped at a time (excluding rifles, which persist after picking up other items). Picking up another will drop your current one at your position. Bundles periodically respawn around the map. There is an NPC ghost in each corner of the map with an event that asks villagers to collect a certain type of item (Bone, Spider Web, Black Goo, or Torch) in order to form friendly NPC patrols to hinder the courtiers. The type of item to collect is less common in that corner of the map, requiring villagers to stray farther in search of them.

In straight one on one combat, villagers will be at a big disadvantage against courtiers. Instead, use tools to either hinder them as you run or work together in killing courtiers. Often, the best strategy is simply to hide somewhere and prepare to stealth if a courtier comes near or to run away. Courtiers have the ability to force a Simon Says style action, where failing to complete the correct action will result in damage to the villager. When this occurs, villagers will be given several skills for actions such as cowering or dancing. Normally, this is not difficult, but if you are being chased by a courtier, it can be deadly. By successfully doing the emote the Mad King demands, you will be stuck in a different animation depending on the skill used but your stealth ability cooldown will be refreshed and can be used at anytime (such as when stuck in an emote). Villagers have superior movement speed to courtiers, however courtiers can place scarecrow that emits a shockwave that causes fear, which forces you to run away from any Courtiers you have line of sight to. Time your dodge roll to be a moment after the scarecrow is placed, because the shockwave does not occur the exact instant the scarecrow spawns. Other hazards around the map include traps placed by courtiers that can damage or hinder you.

As a courtier, you must kill any villager you find. Upon killing a villager, they will respawn as a courtier whose objectives are now the same as yours. Your combat skills should prove sufficiently capable of killing a villager, though catching them is not quite as easy. The map is fairly large, but there are teleportation platforms placed at the north, south, east and west of the labyrinth, which can teleport you freely between them. Tools lying around can be used by both you and the villagers, so make sure to use them whenever possible to deny their use by villagers. Other than tools, villagers' only defense is a 10 second stealth skill. Each tool allows you to set a different trap.

Try to set traps at corners or other locations that are likely to be crossed by fleeing villagers. Your most valuable normal skill is your scarecrow, which can be placed to cause a shockwave the inflicts fear in villagers. Contrary to what one might think, the Fear effect does not drive the Villager from the scarecrow, but instead from any nearby Lunatics. You cannot herd Villagers toward you by using a scarecrow. You can also teleport to the scarecrow's location in order to close distance, though this doubles the recharge time of the scarecrow. Don't forget to beseech to the Mad King when confronting villagers in order to force them to perform a Simon Says like action, which can damage or stall them.

Give Ewan webs to create a feast (1)

Give Ewan webs to summon a plastic spider patrol (1)

Give Maisie bones to create a feast (1)

Give Maisie bones to summon a skeleton patrol (1)

Give Portia torches to create a feast (1)

Give Portia torches to summon an imp patrol (1)

Give Samson ink to create a feast (1)

Give Samson ink to summon an ooze patrol (1)

Each NPC starts the game offering their respective "create a feast" event. Once that event has been completed, the NPC then offers their "summon a patrol" event. Following this a final event will appear to summon a single veteran creature.