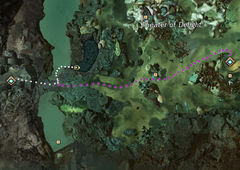 Map of Antre of Adjournment

The Antre of Adjournment is a jumping puzzle in the Theater of Delight, within Malchor's Leap. It is an underground cave which is also used by Arcanist Slizz as a hideout.

From Error: No waypoint named "Valley of Lyss Waypoint" found. Check if it has been added to the area., head east and jump into the river.

The entrance to the puzzle is a small circular opening in the east face of the river canyon, just north of the bridge to the Valley of Lyss Waypoint.

If the Valley of Lyss Waypoint is contested, use

Pagga's Waypoint — and head west until you can jump into the river.