Celestial Challenge is an activity released as part of the Lunar New Year 2020. It consists of several challenges that each grants a stack of

Lucky Aura effect, up to a maximum of 12.

Talk to the Celestial Challenge Attendant near Central Plaza or the 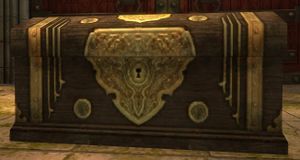 Chest of the New Year

Anomaly:
Volunteering to a different instance will remove all stacks of Lucky Aura as if leaving the map.