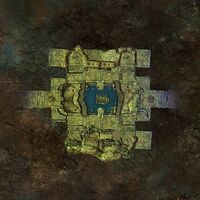 Dragon Ball Arena is an activity released as part of the Dragon Bash 2013 and reintroduced during Lunar New Year. Players can talk to Finolla in the Crown Pavilion to gain access to the arena.

Players are placed on a team of five with the objective to kill the opposing team. Players spawn with only the Dragon Sphere skill and 10,000 health. Throughout the arena are blue health orbs to restore health and power-ups to improve the player's offensive and defensive options. Upon dying, all power-ups are lost and the player will respawn in their team's base. Each player kill is worth 20 points, and the first team to reach 500 points wins.

Upon spawning, players only have the Dragon Sphere skill. Power-ups in the arena unlock further skills but are lost upon death. 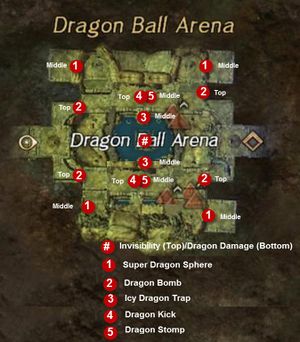 Location of power-ups in the arena.