This article is about the activity. For the achievement category, see Keg Brawl (achievements). 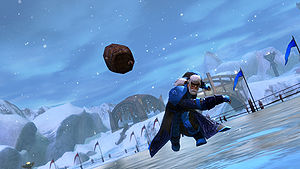 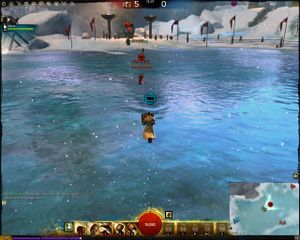 A screenshot of the keg brawl.

-Bring kegs of ale back to your Ale Collector to score points for your team.
-First team to 11 wins.
-Dodge, smash, and steal your way to victory.
-Talk to the Brewer at mid-field to leave the game.

Keg Brawl is an activity which is described as a norn interpretation of basketball[1], with kegs rather than balls and a lot of brawling. Keg Brawl is played in Hoelbrak, but currently entered elsewhere.

You can enter into a match either by talking to

Two teams of five are matched for a game. Each team gets skills which allow them to brawl the other team, such as punching, kicking and knocking each other over. A keg is launched into the middle of the playing area and the objective for the team is to get the keg to their Ale Collector. The aim is to get as many kegs back as possible. The team which scores 11 first or has more points when time ends wins.

When the keg is picked up you get new skills which allow you to pour ale on the ground which makes it slippery or pass the keg. The passing of the keg is ground targeted so there is some skill involved as these passes can be intercepted.[2] Players not carrying a keg are granted swiftness. People carrying the keg are subject to the Barrel Carrier effect.