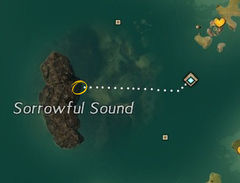 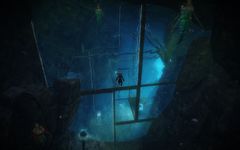 The entrance to the jumping puzzle is found underwater.

Professor Portmatt's Lab is a jumping puzzle located in the western part of Bloodtide Coast.

The puzzle entrance is located west of the Sorrowful waypoint in Sorrowful Sound.

Bug:
Sometimes the console may be unavailable even though all three probes are destroyed. A fix involves waiting for all probes to be fully repaired by the repair golems before destroying one.

The panels to the right of the gate will shift the three coordinates in certain directions based on the option chosen. The numbers will shift in loops; meaning if the first coordinate is already at its lowest register and a player chooses an action that will decrease it further, the coordinate will instead cycle to "wrap around" to the top and highest value. Therefore it is impossible to decrease all coordinates to their lowest register and to start from there.

The possible numbers you can set the console to are below. The correct coordinates are marked in green.

The following table shows exactly which buttons to hit for each possible starting combination. To use this table, find the row with your current initial value, and for each of the panels choose the dialogue option stated. The following actions may be done in any order.

Alternatively you can try this JavaScript tool (credit to Reddit user gubbinsmcgee).