Secret Lair of the Snowmen

Enter the wintry Secret Lair of the Snowmen to restore their leader, Freezie.

Secret Lair of the Snowmen 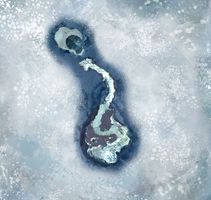 Map of Secret Lair of the Snowmen 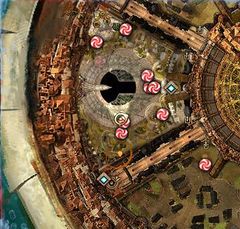 Map location of the entrance to the Secret Lair.

The Secret Lair of the Snowmen is a strike mission[1] that was introduced for A Very Merry Wintersday in 2018 with the December 11, 2018 update.

Upon entering the dungeon, players will be greeted by a frozen snowman, Jolly Donny. Use the nearby Snowball Pile to throw snowballs at him with your special action skill - each snowball counts for 0.75% of his health. Once he reaches full health, he'll be released and will head down the cavern. Along the path, there are several frozen snowmen, they will transform into Ice Crushers and Ice Spikers, the former being melee and the latter ranged combatants. Defeat them and continue, fighting another couple of snowmen just ahead.

Clusters of icy veins on the bridge.

Climbing up the steps, you will come across an icy bridge. The bridge will soon be riddled with icy vein-like lines that cause damage and chilled if stepped on. On the opposite side is group of Ice Spikers and an Ice Dart Turret, which periodically shoots three icy snowballs at players that can cause knock back. It is advised to dispose of the turret first, while being careful not to step on the icy lines, before finishing off the nearby icy foes.

Further in, finish off the remaining two groups of icy snowmen ahead, while avoiding a large snowball sliding down. This snowball leaves a slippery trail, causing players to lose bit of traction and glide (it can be seen again during the final battle). Head to the large double-doors at the end and talk to Jolly Donny to unlock it. Once inside the large room, head down the frozen hole to fight Freezie.

Freezie is a legendary ranked boss capable of dealing both melee and ranged damage. Periodically during the fight, a member of the squad will be fixated by a large snowball chasing them, so it's advised to lead it away from the main group when being chased. Once Freezie reaches zero health, he will start regenerating and a Freezie's Frozen Heart will spawn next to him. In order to damage it (by healing it), players must grab snowballs from Snowball Piles from either killing enemies around Freezie or piles generated by Jolly Donny (spawn locations indicated by green circles), and throw them at the heart, much like the first part of the strike. Try to throw as many snowballs as they can, because Freezie will soon regenerate full health thanks to the Icy Protectors providing him health. Players will have to damage Freezie down to zero health a number of times (depending on how much health the heart has after each phase). Using the action hotkey (typically the hyphen key) will allow players to throw snowballs without retargeting, which offers a significant speed boost.

In later phases, as the frozen heart's health increases, Freezie will gain new attacks and abilities.

Once the heart has been fully healed, Freezie will turn allied and the strike will be concluded.

Each completion of the strike will grant the following:

Upon entering
Frozen Snowman: Uh, little help here? Just throw a couple snowballs at me, please and thank you.

After freeing the Frozen Snowman
Jolly Donny: Now, that's more like it. I was on my way to find help for Freezie. A broken heart has turned his snowy joy to cruel ice.
Jolly Donny: We've got to thaw his heart and give him back the cheer of Wintersday.
Freezie: This day is mine, this lair is mine. You dare to challenge me? Minions! Freeze them out!

Talking to Jolly Donny
Jolly Donny: It's not too late to save my friends! Bust their icy shells to free them!

What happens after we free your friends?

Then we just have to go help Freezie. His heart's become ice, but some loving snow should thaw it!

Upon rescuing Snowmen (random chance at one of the following)
Snowman: (joyful giggling)
Snowman: Thanks for the thaw!
Snowman: Hooray, hooray! It's Wintersday!

At the beginning of "Repeat the rescue
melt more minions!"
Freezie: Who are you to judge what we became once Dwayna abandoned us? I lead the snowmen! I give them purpose!

At the beginning of "Watch for ice on the bridge!"
Freezie: The force of my dominion is greater than any joy. Not just on Wintersday, but on every day to come.

At the beginning of "Thaw the ranks and get Jolly Donny to the door."
Freezie: We waited so very long for the call... But no longer! We are made of stronger stuff than flimsy flurries.

Talking to Jolly Donny
Jolly Donny: Freezie's more cheerful most of the time, really! He's just a little too cold this year. Let's warm his heart with some holiday fun!
If public:
(Advancing will lock your party and prevent any other players from joining the Strike Mission.)

All right, let's save Wintersday.

Your party has been locked.
No new players will be able to join the Strike Mission. Work with your party to complete the goal!

We're still waiting for more people to show up.

Jolly Donny: Freezie's more cheerful most of the time, really! He's just a little too cold this year. Let's warm his heart with some holiday fun!

All right, let's save Wintersday.

A snowball appears
A giant snowball is chasing <Character name>!

At the beginning of "Defrost Freezie!"
Freezie: Come! Face the greatest snowman ever made!

During heart phase
Jolly Donny: Quick! Use these to heal his heart!
Freezie: No! I need the bitter ice. Minions, restore me!

After heart phase
Freezie: What have you done? My heart feels...warmer.

After defeating Freezie
Freezie: Friends, thank you for mending my heart. Sorry for being such a jerk.
Freezie: It feels good to be all snow again. I'm full of Wintersday joy, and it's time to share it 'round!

Freezie: Merry Wintersday, friend! I was so focused on Dwayna's absence that I nearly forgot what I was protecting. Thanks for reminding me!

When throwing snowballs at Freezie
Freezie: Oh! I see you'd like to play!

Speaking to Jolly Donny after completing the strike mission
Jolly Donny: Do you want to return to Divinity's Reach? 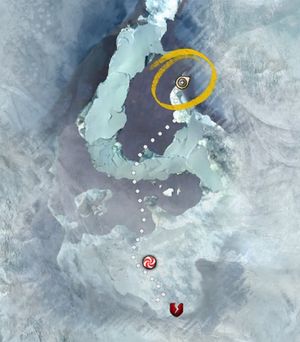 Location of the skeleton